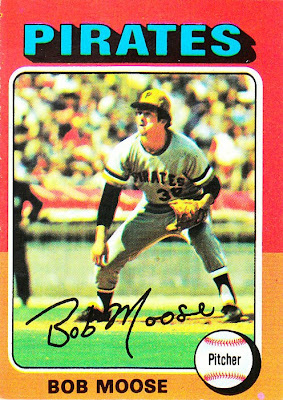 Card fact: Bob Moose's appearance on this card is in drastic contrast to his appearance in the photos on his Topps cards for the 1974 and 1976 sets. I wonder if this is an earlier photo of Moose, from as early as the 1972 season.

What I thought about this card then: Obviously, I thought it was amazing. A friend of mine had this card. It was one of the few '75 cards that he had (but he did introduce me to the 1972 set). He didn't have a big interest in baseball -- proof of this was he was both a Yankees and Mets fan, which I still am doubtful is possible. But he did like items that stood out, no matter what they were, and this card stood out.

What I think about this card now: Bob looks like he's ready to field a comebacker.

Other stuff: Moose grew up in western Pennsylvania and ended up playing his whole career for his hometown team. He broke in with the Pirates in the late 1960s and busted out in 1969 by no-hitting the Mets in September of that year. He finished with a 14-3 record and a 2.91 ERA.

Moose started and relieved for the Pirates throughout his career. In 1972, he was in the starting rotation, but appeared as both a starter and reliever in the National League Championship Series against the Reds. He didn't fare well as a starter in Game 2. Then in the decisive Game 5, Moose entered as a reliever with two men on and no outs. He retired the first two batters, but then threw a wild pitch that allowed George Foster to score with the winning run.

After the 1973 season, Moose struggled with injury problems for two years. He moved back to the bullpen in 1976, appearing in 53 games, and was ready to be the Pirates closer the following season. But he was killed in a car accident in October of 1976 on his 29th birthday. 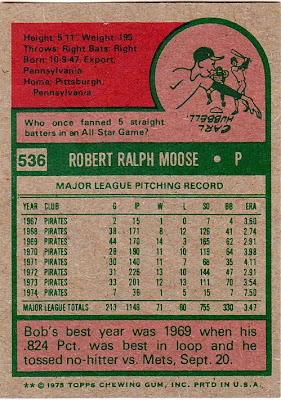 Back facts: You can see that Moose pitched in just seven games in 1974. He suffered a blood clot problem in his shoulder and had to have a rib removed to alleviate pressure on a compressed vein. He didn't pitch after late May.

Other blog stuff: If you'll allow me to be morbid, Moose is the 50th deceased player we've come across in this set.
Posted by night owl at 2:14 AM

It could just be the lighting on the pic, but it looks like he has one helluva wad of chew in his cheek. Of the 50 deceased, I wonder if he was the youngest to go. Sad.

I know I commented on this one. Something about a sad milestone with the 50th deceased player of the set.