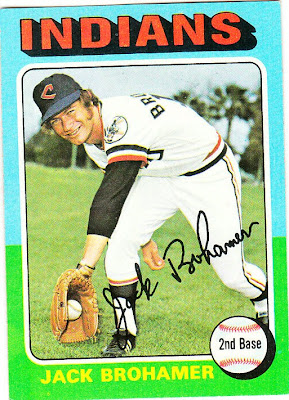 Card fact: It's been 77 cards since the last light blue-green bordered card. The day baseball color combo just climbed out of last place.

What I thought about this card then: I had the mini card. It was one of my first minis. It's pretty beat up now.

I thought Jack Brohamer seemed like a very happy fellow.

What I think about this card now: It still looks like a happy picture. I like the diagonal nature of the signature, too.

Brohamer battled for playing time with Chicago as the White Sox had Jorge Orta at second. When the Red Sox acquired Brohamer via free agency, he didn't get to start because the Red Sox also picked up Jerry Remy in the offseason. Remy became Boston's starter at second.

Brohamer returned to Cleveland in 1980 and finished as a bench player. After his career, he worked in his family's sheet-metal business. 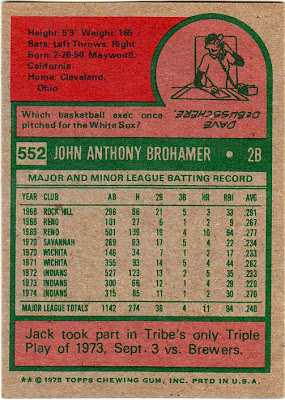 Back facts: The triple play mentioned in the writeup happened in the first inning of a game between the Brewers and the Indians. Cleveland pitcher Milt Wilcox gave up a home run to the first batter of the game. Joe Lahoud, then walked Bob Coluccio and Dave May. George Scott singled, scoring Coluccio and sending May to second. Then Don Money came to the plate and lined out to Brohamer at second. Brohamer stepped on second base to force out May who had left second on Money's hit, and threw to first to catch Scott for the third out of the triple play.

He does look pretty happy. Maybe it's that triple play. By the way, the back of the card makes it sound like teams get triple plays all the time. It's as if it was a surprise the Indians only had one in 1973.

PATP...that's funny. I had the same thought about the triple play when I read it.

Just thought about Jack Brohamer today and found this webpage. He was in my high school class at Huntington Beach High School. He probably does not remember me but I remember him. He was a nice guy who was a great athlete but came accross as very humble of his talents. I remember being happy for him when he was drafted by Cleveland.