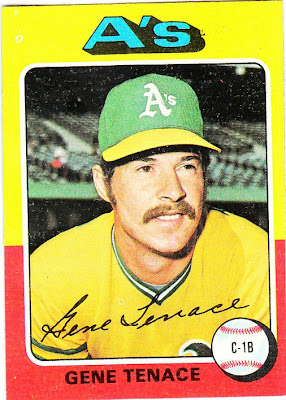 Card fact: Fifteen of the 20 Oakland A's cards featured so far have either yellow or green as a border color.

What I thought of this card then: It was one of my favorites. I pulled it while on a family vacation and it came from my all-time favorite pack purchased in 1975 (the pack also contained Bake McBride and Garry Maddox). For a long time that year, I would keep the cards that I pulled from that pack separate from all my other '75 cards. That pack was special.

What I think about this card now: The lighting makes it almost appear as if the photo was taken at night. But we know there were precious few night cards in the '75 set.

Other stuff: Gene Tenace entered baseball history in 1972 when he homered in his first two World Series at-bats during the A's triumph over the Reds. He would go on to hit four home runs total and was named the World Series MVP.

It was his big breakout season and he continued to be a key part of the A's three straight World Series victories. Tenace alternated between first base and catcher during this period. In 1974, he enjoyed a peculiar season in which he hit .211 in 158 games, hitting 26 homers, driving in 73, leading the league in walks with 110, and striking out 105 times. 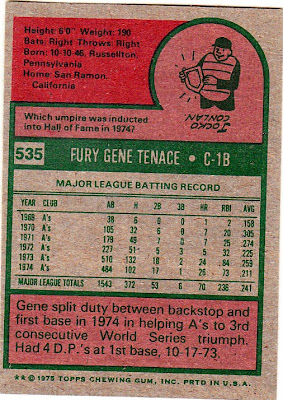 Also, Tenace's first name of "Fury" is an apparent Americanization of the Italian "Fiore." I think.

Other blog stuff: On this date in 1991, Jose Canseco is photographed leaving the New York apartment of Madonna. Years later, she was hanging out with A-Rod. Madonna sure liked the drug-abusing ballplayers didn't she?
Posted by night owl at 2:41 AM

Fury? That is too cool.

I thought that cartoon looked familiar. I'd think Madonna would be a decent power hitter from all the drugs she got from those two...you know what, I'm going to leave it at that. Great colors on that card by the way and a pretty decent sig by Mr. Tenace.

Stinkin' blogger. I know I commented on this one.