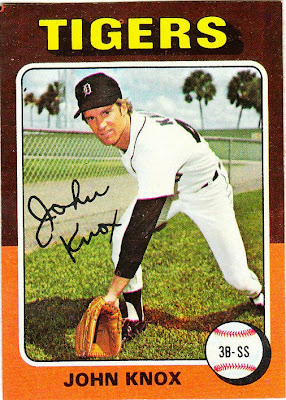 Card fact: This is John Knox's first solo card. He appeared on one of the 4-player rookie cards in the 1974 set.

What I thought about this card then: I never saw it. Knox is another one of those players that I didn't even know existed until I started to put together the set again in 2004.

What I think about this card now: It's amazing how many of the backgrounds on these cards make the player look like he's the last person on earth. Where is everyone?

Despite a career .274 average, Knox was only a part-time player -- known more for his fielding -- for Detroit. He was also used as a pinch-runner. 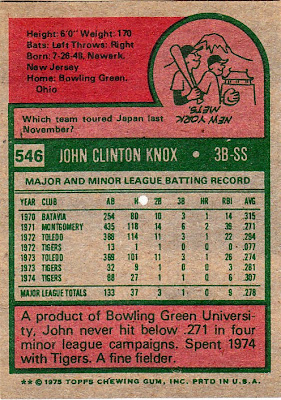 Back facts: There is even a baseball card set that commemorates the Mets' trip to Japan in 1974.

Other blog stuff: Former Dodgers pitcher Tommy John was born on this date 68 years ago.
Posted by night owl at 12:55 AM

It's hard to imagine a 3B-SS fielding a grounder that close to the fence. What? You mean that's a staged photo!? The horror!! Happy belated birthday Tommy John.