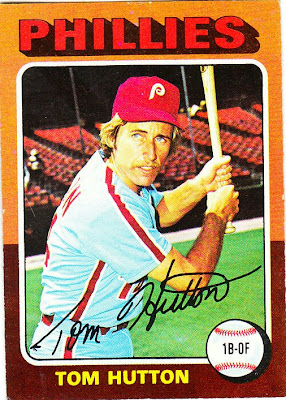 Card fact: I've got no facts for this card. His eyes match with his uniform. How's that? There's your fact.

What I thought about this card then: I didn't see it. The first card of Tom Hutton's I saw was his 1976 Topps card. He had the white man's afro going. But his hair was so light, it looked gray, so I thought he looked like a little grandpa swinging the bat. I'm sure Hutton would be thrilled by that, seeing as he was 28 at the time.

What I think about this card now: That is one impressive signature. It puts just about every modern day ballplayer's autograph "skills" to shame.

Other stuff: Hutton started in the Dodgers organization and had some terrific seasons in the minor leagues, but just couldn't break through L.A.'s lineup. He was traded to the Phillies in a deal for Larry Hisle (Hisle never played for the Dodgers). The Phillies were a lot worse than the Dodgers at the time so Hutton had no trouble breaking through, working as a backup infielder and outfielder with Philadelphia.

Hutton later played for the early Blue Jays teams and finished up his career with the Expos. Since his playing career ended, he's been an announcer for a variety of teams and worked several years for ESPN. I remember him working with the Expos back in the 1980s. Last I knew, he was a color guy with the Marlins. I always see him when MLB Extra Innings has its free preview every April. 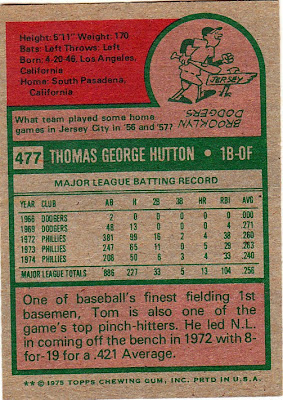 Back facts: The Brooklyn Dodgers' games in Jersey City were perceived by some fans as a sign that Walter O' Malley was willing to move the team elsewhere. O'Malley said that wasn't necessarily true at the time -- he was hoping to get a new stadium in New York -- but of course it did end up being true.

Other blog stuff: Jimmy "The Toy Cannon" Wynn was born on this date in 1942. We have yet to arrive at his card in the set. It's a great one.
Posted by night owl at 3:23 AM

This is a horrible card. Was Huttin ever in a good card? I cannot recall.

I'm playing catch-up again. I'm a little creeped out by the shadow on his arm. It's so dark and the contrast with his left hand makes it look like a bad burn or something.