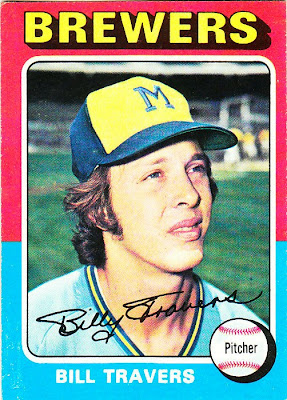 Card fact: This is Bill Travers' rookie card. Or "Billy Travers," as he apparently preferred.

What I thought about this card then: I did not see it.

What I think about this card now: Please note the Oakland A's in the background. And note the pained expression on Travers' face as he looks to the stands for help in facing the World Champion A's.

Now look at Travers' card from the 1976 Topps set. 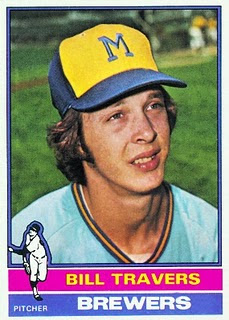 The guy needs help facing the A's! He's been looking for a year now! Somebody HELP HIM!

Other stuff: Travers pitched most of his career for the Brewers. He struggled with arm problems in the minors, but emerged with Milwaukee in 1974. A forkball helped him stake a spot in the rotation, and he enjoyed a few solid seasons with the Brewers. He went 14-8 in 1979 and 12-6 in 1980.

After the 1980 season, he signed a free agent deal with the Angels. But arm problems struck again and Travers pitched in only 14 games over three seasons for the Angels, ending his career in 1983.

Travers later played on the candlepin bowlers' circuit in Massachusetts, his home state. 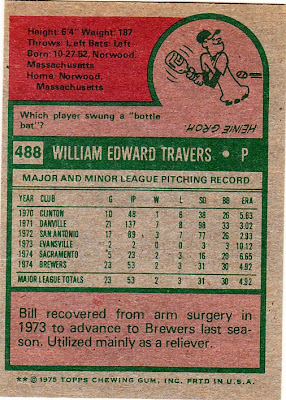 Back facts: A "bottle bat" is a bat that doesn't taper from the end to the handle. The bat's body is all one width and wide, like a bottle. It then ends suddenly at the "bottle neck," where the handle begins. It's almost as if the bat is two separate pieces. It's strange. But then again, so is the name "Heinie."

Heinie was a short form of the German name Heinrich, which is the equivalent of the English name Henry. In the late 19th century and early 20th century U.S., Heinie was apparently a common nickname for men of German origin or ancestry whose real first name was Heinrich or Henry. Somewhere along the line it became a generic term for a German person and was sometimes used as a nickname for German-American men even if their first name was something other than Heinrich or Henry. According to wikipedia, there were at least 22 MLB players in that era who went by "Heinie".

Looking back in Heinie-sight, maybe the name wasn't so strange.

I vividly remember the 1976 card and we always thought he was about to burst out into tears. Funny that the 1975 card is so similar and probably came from the same shoot.