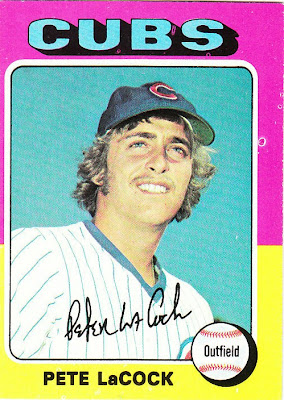 Card fact: This is Pete LaCock's rookie card. I think it's safe to say the world was never the same after this.

What I thought about this card then: I vaguely remember seeing it. Perhaps a friend of mine had it. I remember it as one of those goofy-faced players that we relentlessly mocked. I also remember being amused by his name, but having no idea why.

What I think about this card now: That sure is a majestic shot for a guy who was hitting .204 on the back of this card.

Other stuff: LaCock is a legend on the sophomoric humor circuit. In fact, LaCock and a future '75 Topps subject, Dick Pole, have starred in front of standing room-only crowds for years. The mere presence of their cards throw collectors into giddy fits of hysteria.

Aside from that, LaCock was a part-time player for the Cubs and Royals between 1972-1980. He actually worked his way into a starting role at the end of his career with the Royals. In fact, LaCock has the honor of hitting a home run in the first major league game I ever saw in person on July 15, 1978 against the Yankees. Yes, the first home run I ever saw in person was hit by LaCock. It was all downhill from there.

LaCock later played in Japan, and has worked as a coach in the minors and in independent leagues, most recently in 2009 for the Tucson Toros.

LaCock is the subject of a famous quote by Bob Gibson. On the occasion of his retirement, Gibson said, "When I gave up a grand slam to Pete LaCock, I knew it was time to quit." 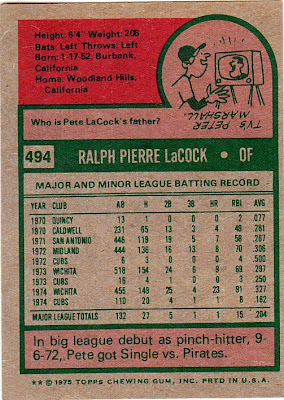 Back facts: LaCock's father was the longtime host of "Hollywood Squares." Peter Marshall's given name was also Ralph Pierre LaCock. I often wondered why LaCock didn't go by Pete Marshall, too.

Then again, I suppose he wouldn't be the legend he is now if his name was Marshall. Dad knew what he was doing.

Other blog stuff: The pink-yellow border combo has crossed the 40 threshold with this card. It's the third combination to do so, and could have a real shot of taking over first place by the time this blog is done.
Posted by night owl at 1:52 AM

And of course his sister was "Laverne", Penny Marshall. Too bad he never played in Milwaukee with Bob Shirley.

Jim, I think you're confusing Pete LaCock's father and Hollywood Square's Host Peter Marshall with Happy Days producer Garry Marshall who happened to be the brother of Laverne and Shirley's Penny Marshall (neither of whom are related to Pete LaCock).

I remember watching another game show Peter Marshall hosted in the early 1980s. He mentioned to a competitor who was a minor league baseball player that his son had played baseball. I knew the name of his son because I read it on the back of a card...but I did notice that Marshall didn't actually say the son's name.

I always wondered whether that was because the player knew him, or because viewers might get confused by the fact that the last names didn't match...or because the censors said, "no, you can't say that on TV."

Hey, you have to give Pete credit for at least not going by "Peter" LaCock. Too bad Dick Pole didn't have the similar good sense to elect "Rick" or "Rich" as his first name.

I still remember pointing out to my friend and his Mom that he was Peter Marshall's son. They didn't believe me until I read the cartoon on the back to them. My pal's Mom was very strict and I have no idea if she thought anything was funny about his name. I don't even want to think about it.

Quite a write up on the back of the card.

I still say the worst name in the history of sports is Nascar guy Dick Trickle.

Interesting that LaCock would get so many comments...I'm just sayin'.

Penny is Pete's 1/2 sister I believe. He is a neighbor of ours.

Actually, Peter Marshall's sister and Pete LaCock's aunt was a popular and very hot 1940's movie actress named Joanne Dru. She was in a lot of westerns, but most famous part was in All The King's Men, which won the best picture Oscar some time in the late 40s.