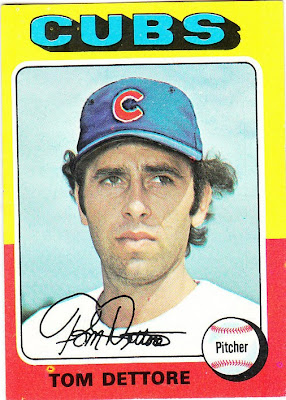 What I think about this card now: I can't get over how many Cubs there are in this set that I had never heard of before. Tom Dettore, Ken Frailing, Carmen Fanzone, Rick Stelmaszek. All of these players I knew nothing about until I was trying to complete this set 30 years after they played.

Other stuff: Dettore started out with the Pirates as a hitter. He switched to pitching and toiled for a few years in the minors before reaching Pittsburgh in 1973. The Pirates promptly traded him to the Cubs on April 1, 1974 (apparently too late for Topps to get Dettore in a Cubs uniform since his cap is airbrushed).

Dettore pitched three years with the Cubs, with 1975 being his most successful season. He was out of the majors by 1977 and done playing by 1978. He later became a coach for the Pirates and Mariners in the minor leagues and continues to coach in the minors at age 63. 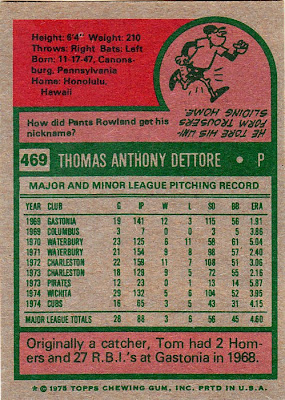 Back facts: Pants Rowland was the White Sox's manager from 1915-18 and later became a huge figure in minor league baseball for decades. Another account of his nickname says that he received the moniker when he was a kid, playing baseball in his father's overalls.

Other blog stuff: On this date in 1988, Kirk Gibson walked out of Dodgers training camp after teammate Jesse Orosco places eyeblack in Gibson's cap as a practical joke. L.A. knew there and then that Gibson, who returned the next day, meant business, as he would later show in the World Series that year.
Posted by night owl at 2:22 AM

I nominate Tom for most disinterested player in the whole set.

I can't believe you never heard of Tom Dettore before!! What I remember most about him is that he was #31....Fergie's number. It was very strange to see someone other than Fergie Jenkins with #31 on his back...and Tom Dettore wasn't exactly as good as Fergie either.

How funny that Stelmaszek had the best overall career (including coaching).
I don't know much about the process, but April 1 seems ridiculously early to have needed an airbrush job. Was it that costly, time-consuming oer other for them to get a real cap on so many players?