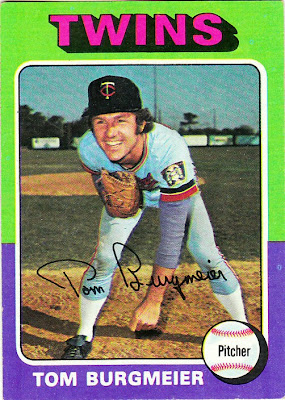 Card fact: No fact today. Got to make this quick. I'm losing an hour of sleep ahead of working four straight 12-hour days. Who's the idiot that moved daylight savings time from April to March?

What I thought about this card then: My brother had this card. Tom Burgmeier's pitching pose is very odd in combination with the grin on his face. He's crouched so low and his right arm is pressed so close to his body that he looks like some sort of four-legged creature forced to walk on three legs because his front right leg is crippled. Either that or he looks like he's stuck his head through the hole in one of those life-sized cardboard cutouts, this one set up so you can pretend you're a baseball player.

What I think about this card now: It's a very strange pose. Given how close it is to St. Patrick's Day, I'm almost getting a leprechaun vibe.

Other stuff: Burgmeier was a relief pitcher, mostly with the Royals, Twins and Red Sox, from 1968-84. Out of the 745 games in which he appeared, he started only three games and two of those were in the first year of his career.

Burgmeier was a situational lefty and pretty reliable. He didn't rack up a lot of saves as he often came in during the middle of games. (He did set a Red Sox team mark for lefties with 24 saves in 1980, his only All-Star year). Burgmeier's ERAs were almost always under 3, especially during his years with the Red Sox.

Burgmeier became a coach after his career, but not until the 1990s. He worked as a pitching and bullpen coach, as well as a video coordinator for several teams in the Royals organization. He also worked in the Orioles organization. 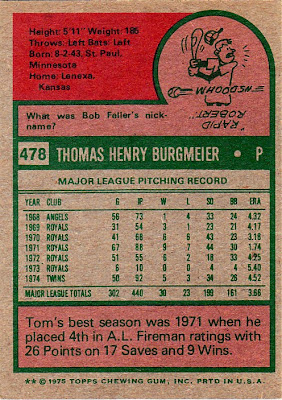 Back facts: Ah, the old Fireman ratings. The Rolaids Relief Man points system is a forgotten statistical measurement of the past. It was quite the big deal during the '70s, though.

Other blog stuff: On this date in 1960, the White Sox unveiled a uniform innovation that I appreciate to this day. They put the players' last names on the back of their jerseys.
Posted by night owl at 4:47 AM

I think he's grinning because he's not pitching in the desert landscape like the Astros. I didn't know the Sox were the first ones to put the names on the back of the uniforms. Thank God for that.