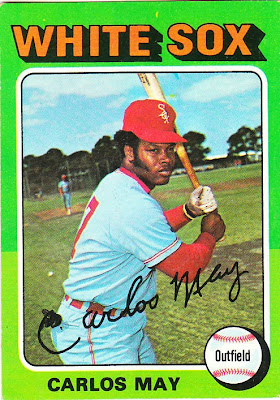 Card fact: Carlos May is one half of one of the brother combinations in this set. His brother, Lee May, was featured way back on card #25.

Other brothers with cards in this set are Phil and Joe Niekro, Gaylord and Jim Perry, Graig and Jim Nettles, Bob and Ken Forsch, and George and Ken Brett.

Other stuff: May started off strong with the White Sox, despite getting most of his right thumb blown off during a mortar unit cleaning accident while in the Marine reserves. His incident was a mild childhood obsession of mine.

May was named the Sporting News rookie of the year in 1969, even though Lou Piniella won the actual MLB rookie of the year award that year. May continued to put up decent numbers for Chicago throughout the early 1970s. But by the mid-70s, he was expendable and acquired by the Yankees the day after his birthday in 1976.

May played in the World Series for the Yankees that season, but it was his last hurrah. He didn't play much in '77, and ended his career with the Angels that same year. He then played four years in Japan, and now works in community relations with the White Sox.

Oh, and he's the only guy to wear his birthdate, "May 17," on the back of his uniform. He switched his uniform number from 29 to 17 after his first season. 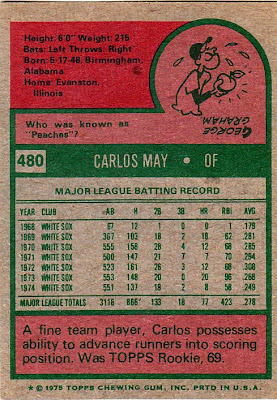 Back facts: I think Topps was being a little generous giving May a card number ending in zero. May took a downturn in 1974.

Other blog stuff: The No. 1 song in the country on this date in 1975 was "Black Water" by the Doobie Brothers. "And I ain't got no worries, cause I ain't in no hurry at all."

Sure would like to be that dude.
Posted by night owl at 2:34 AM

I always liked how on this card his signature combimes with the batting glove in his back pocket, causing an interesting effect.

I didn't notice that was batting glove in the pocket until T-Bones comment pointed it out. I thought it was an ink splotch. Gotta love the return of the tilty background. I don't know how that glowing Dick Allen?? can even stand up in the background.