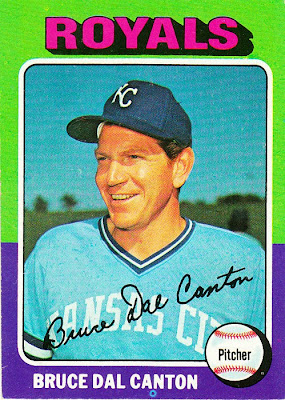 Card fact: This is one of the cards I received in the first trade I ever made. It was with my good friend, Mario.

What I thought about this card then: I thought Bruce Dal Canton looked very grown up. He must be at least 45 or 50 years old, I thought. In fact, he's 32 at the time of this photo.

What I think about this card now: He has to be one of the happier-looking players in this set.

Other stuff: Dal Canton was mostly a relief pitcher for several teams between 1967-77. He pitched for the Pirates, Royals, Braves and White Sox. His best seasons were at the tail end of his time with the Pirates and during his stay with the Royals. He came over to Kansas City with Freddie Patek in a deal that worked fairly well for the Royals.

Dal Canton didn't become a major leaguer through traditional channels. He was a school teacher when he was signed by the Pirates during an open tryout. After his major league career, he returned to his teaching roots by becoming a minor league instructor for the Braves, a job he held for several years.

Dal Canton died in 2008 from esophageal cancer at age 66. 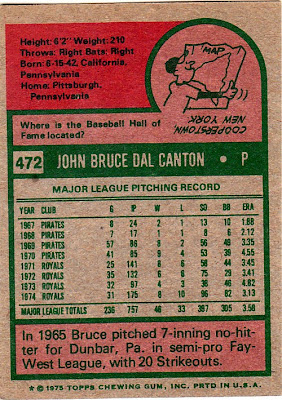 Back facts: That is the worst drawing of New York State I've ever seen.

Other blog stuff: The No. 1 song in the country on this date in 1975 was "Best of My Love" by the Eagles. Probably my least favorite Eagles song of all-time. Or maybe that's "Witchy Woman."
Posted by night owl at 1:58 AM

So was he born in California or Pennsylvania? I kid.

I agree that he looked a lot more mature than his real age. For some reason I associate him with being a manager rather than an active player. That's how old he looked to me as a kid and it stuck with me.

I remember as a kid thinking he was a manager as well.

I think I just figured out why I thought he was a manager. Del Crandall was managing for the Brewers in the early 70s and the similarity between the names (Del Crandall/Dal Canton) must have confused me. To this day, apparently.

They even looked slightly the same:

Oh, yeah. I'm positive I thought the two were one.