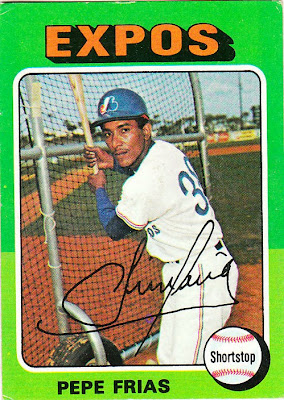 Card fact: This card achieves the hard-to-reach trifecta of batting helmet, batting cage and Coca-Cola ad in the background.

What I thought about this card then: I remember my brother and I ragging on poor Pepe relentlessly when we were kids. This was in the top five of ridiculed cards as a youngster. I think it was all based on his batting average and his name "Pepe."

As I got older, I wondered about his signature. It looked like it said "Chrysalis," which I knew from "Chrysalis Records," the label that signed Blondie, Pat Benatar, Huey Lewis and the News, and others. Leave it to me to associate new wave rock with a Latin American ballplayer.

What I think about this card now: Frias appears to be facing the wrong way if he wants to get a hit.

Other stuff: Frias was a utility infielder with the Expos after spending several years in the minors. He only played in at least 100 games once until he was sent to the Braves. Atlanta suddenly made him its starting shortstop in 1979 and he performed OK, hitting .259 in 140 games.

Frias finished out his career as a backup with the Rangers and the Dodgers. I remember being particularly embarrassed over having a 1981 Fleer card of Frias as a Dodger, considering how little regard we had for him back in 1975. 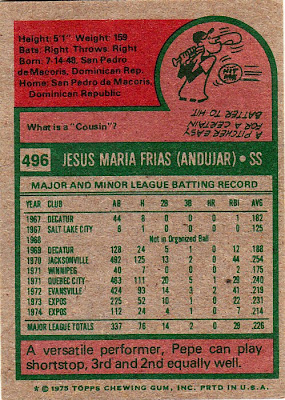 Also, I have never heard of the term "cousin."

Other blog stuff: Here is the original '75 Frias that I pulled from a pack and that we kicked around so often: 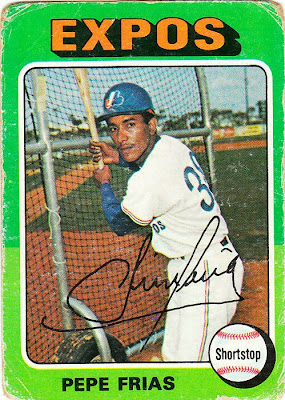 I've never heard that term used in baseball before. Then again, I'm "only" 40! I keep thinking that batting cage is going to roll away on that tilted field.

My two favorite Chrysalis acts were Jethro Tull and UFO.