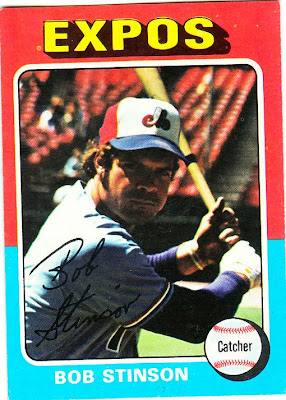 What I thought about this card then: I had the mini card, and it was one of my favorite minis. The photos with a player's face in the shadows were instant favorites of mine.

I had a mental block -- if little kids can have mental blocks -- with Bob Stinson. I remember seeing his 1976 Topps card, when he's with the Royals, and thinking that it was the first time I had ever seen a card of Stinson, but not realizing that I had his 1975 card all along. I was ditzy even as a kid.

What I think about this card now: I like how Topps tucked his signature onto his uniform.

Other stuff: Stinson was a journeyman backup catcher for most of his career. He started out with the Dodgers, then was traded to the Cardinals in the deal that helped L.A. land Dick Allen. Stinson later went to the Astros and then the Expos. But Stinson didn't hit much until he arrived in Kansas City.

After the 1976 season, Stinson was selected in the expansion draft by Seattle. With the Mariners, he began to see some starting time and hit fairly well. He played four seasons with Seattle. His last year in the majors was in 1980. 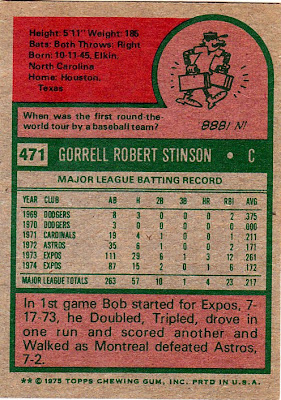 Back facts: Gorrell. Now there's a first name you don't see much.

Other blog stuff: Let's see the mini next to the regulation-size Stinson: 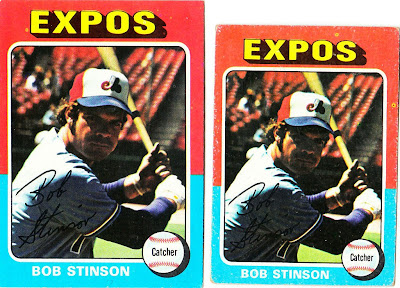 Still a very cool card.
Posted by night owl at 3:21 AM

Great looking card. I love the red and blue border with the red seats and the blue uniform.

His '77 card is one of the all-time worst airbrush jobs Topps performed. I know Seattle was an expansion team, but jeez.

Greg,
Even though it's '75 OPC instead of '75 Topps, this YouTube video will probably take you down memory lane. I'd note that one of the cards in the pack you'd have been very happy to pull as a youngster.

The colors are great on that card.

For a good write-up on that 1888 World Tour, check this out: