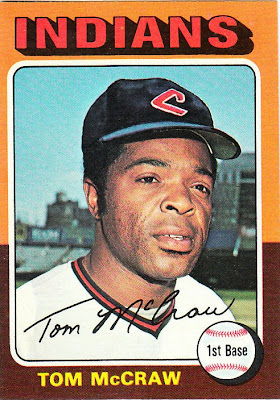 Card fact: This is the final card of Tom McCraw issued during his career.

What I thought about this card then: My brother had this card. It was one of those cards that I was glad he had. I had no interest in acquiring it.

What I think about this card now: McCraw is airbrushed into an Indians cap. He was purchased by the Indians from the Angels in July of 1974. It appears that Topps left McCraw in his Angels jersey.

Other stuff: McCraw was a first baseman and outfielder for the White Sox, Senators, Indians and Angels. He spent the first seven years of his career with Chicago. He had speed but didn't have a ton of power, which is unusual for a guy who played so many games at first base.

McCraw was the first designated hitter in Angels history. After his playing career, he became a major league hitting coach and worked for several organizations for 30 years, just concluding that phase of his career a few years ago. He was a regular on Frank Robinson's coaching staffs. 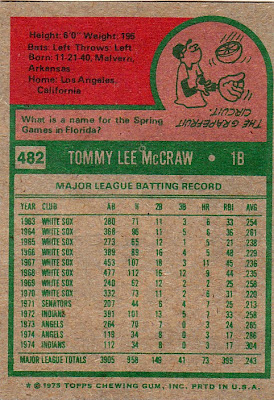 Other blog stuff: After losing a little bit of ground as the overall leader, the orange-brown combination is pulling away again. This is the 45th orange-brown card so far, which is six more than the next highest combination.
Posted by night owl at 2:26 AM

It's probably just me, but he looks much older than 34 on that card. You must really, really, and I mean really, look at those stats to have noticed those two years matching up that closely. Now I wish he had 7 fewer at bats too. I wonder if that's the closest anyone has come to the same stats in back to back years. Not enough to research it, but still, I wonder.