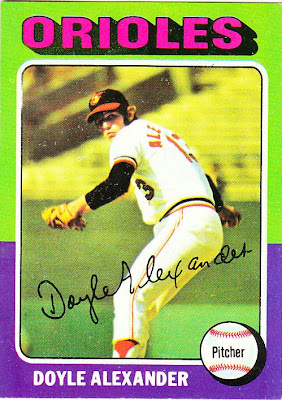 Card fact: I could be wrong, but I think this is Doyle Alexander's last card without him featuring his trademark mustache.

What I thought about this card then: I didn't see it. I feel robbed every time there's a '75 Topps card with an action shot that I didn't see as a kid.

What I think about this card now: Lots of people in the stands today.

Other stuff: Alexander compiled a 19-year career in which he displayed moments of greatness interspersed with periods of plain average pitching. He played for eight teams and produced some memorable seasons, like going 17-11 for the Rangers in 1977, back-to-back 17-win seasons for the Blue Jays in 1984 and 1985, and a 9-0 record to close out the 1987 season with the Tigers.

Alexander was also involved in some of the more notable trades in history. He went from the Dodgers to the Orioles in 1971 in the deal that sent Frank Robinson to L.A. He went from the Orioles to the Yankees in the deal that brought Tippy Martinez, Rick Dempsey, Scott McGregor and Rudy May to Baltimore. He's also been traded for John Montefusco, Duane Ward, and of course, John Smoltz. The Smoltz deal in 1987 is why most younger fans know the name Doyle Alexander. It's known as one of the most lopsided trades in history.

Alexander lost a major league high 18 games in his final season in 1989. He also led the league in home runs allowed with 28.

But I know him most for being airbrushed from head-to-toe into a Rangers uniform while on the mound in the middle of Yankee Stadium on his 1977 Topps card. 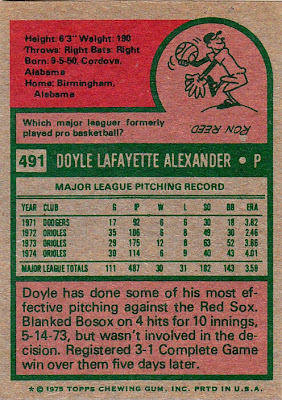 Back facts: This exact same cartoon question was asked on another '75 card. In fact, it was on Ron Reed's card. At least the cartoon is different on each card.

Other blog stuff: On this date in 1951, Mickey Mantle hits a home run estimated at between 654-660 feet during an exhibition game against UCLA at Bovard Field. The ball clears the field and the width of a football field before landing.
Posted by night owl at 3:05 AM

I need to look through my '77 Rangers and see if I have that one. On that 1977 Ranges team, Doyle led a staff that included Gaylord Perry (15 wins) and Bert Blyleven (14 wins). The Rangers went 94-68 that year and still finished 8 games back of the Royals.

Doyle got the win as the Jays clinched the AL East in 1985 (went the distance IIRC). I've always had a soft spot for Doyle, even as he helped kill us in 1987.