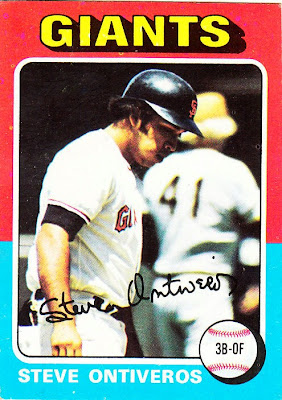 Card fact: This is Steve Ontiveros' first solo card. His rookie card is one of those four-player cards in the 1974 Topps set.

What I thought about this card then: This is one of the most memorable cards of my first year of collecting. I pulled this card after one of my trips to the drug store, and it was always a favorite.

What I think about this card now: As a kid, I never noticed the person behind Ontiveros in the photo. But I do now. I'm not positive on the ID of the player. It doesn't appear to be a Giant because of the color scheme. But if it is a Giant, a pitcher by the name of Don Rose wore the number 41.

However, because of the color scheme, I'm saying it's either a Padre or a Pirate. There was no one who wore the No. 41 on the Padres (unless it was a coach). But the Pirates did have a player who wore No. 41. It was pitcher Jerry Reuss. And he certainly was goofy enough to wear a sun hat during a game. So I'm hoping that's who it is.

Ontiveros has another classic card in the 1976 set. He's charging around third base with Mike Schmidt in the background.

Other stuff: Younger fans remember Steve Ontiveros as a pitcher for the Oakland A's. But that's not the same guy. They're not even related.

Ontiveros was an infielder who played for the Giants and Cubs between 1973-80. He didn't get to start regularly until he was dealt to the Cubs, along with Bobby Murcer, in a deal that sent Bill Madlock to the Giants. Ontiveros became the Cubs' regular third baseman, and he had a strong first season with Chicago in 1977.

After playing three more years with Chicago, his career ended in 1980. He went to Japan and played there until 1985. 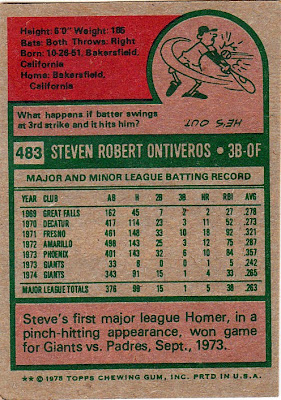 Back facts: I distinctly remember reading the 1974 stats on the back of Ontiveros' card and thinking he deserved a rookie cup on the front of the card.

Other blog stuff: Here is the card that pulled out of that pack in 1975: 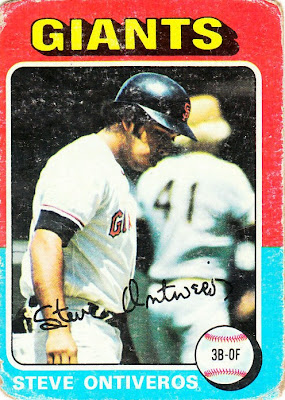 Still no rookie cup.
Posted by night owl at 3:04 AM

Before I even read through the post, my instinct was that it was Reuss. Believe it or not, I think that's his hair flaring out from underneath the cap.

I agree with Kevin.

I also think that you see the sun reflecting off of his hair.

Rats. No sun hat. At least it's Reuss.

I think it's interesting that now you'll probably think more about Reuss when you see that card than Oniveros.