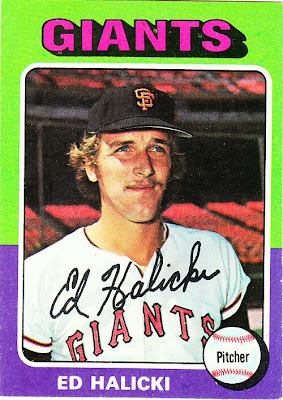 What I thought about this card then: I didn't see it. The first card of his I saw was in the 1976 Topps set. I would get him confused with John Montefusco, which is appropriate as they both threw for the Giants and both pitched no-hitters within one year of each other.

What I think about this card now: I sure would like to know who the photographer was that took all the photos for Topps in Candlestick Park during the 1970s. He was a busy guy.

Other stuff: Halicki was a big dude -- 6-foot-7 -- and quickly made an impact for the Giants by no-hitting the Mets at Candlestick Park in 1975, his second season. Two years later, he won 16 games and the Giants seemed primed, from a pitching standpoint anyway, to make an impact in the N.L. West. They also had Montefusco, Vida Blue and Bob Knepper on the staff. But the late '70s were a disaster for the Giants. Halicki didn't pitch well and had issues with how he was used. He eventually found himself on waivers.

The Angels picked him up, but he lasted just one season there and after a tryout with the Phillies, his major league career was over.

Halicki's name recently came up when Jonathan Sanchez pitched a no-hitter for the Giants in 2009. Sanchez was the first Giant to throw a no-hitter at home since Halicki. 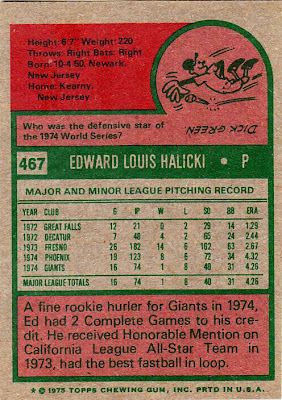 Back facts: The 1974 World Series references continue even though we're done with the postseason subset. Green indeed was the defensive star of the Series, making several rally-killing plays.

Other blog stuff: I was recently contacted by a relative of pitcher Tom Buskey, who was featured on Card No. 403. The information that I received on Buskey's death was incorrect. I have changed it so that it is accurate, and I thank the Buskey family for contacting me about it.
Posted by night owl at 2:12 AM

Double whammy. First the subset reminds you the A's won the Series and then a Giant leads off. This makes 20 comments tonight...I'm officially caught up!

The photographer may be a guy named Doug McWilliams. Jim mentioned that on my blog awhile ago when I kept screwing up the fields. He's been a big help.

It was Doug McWilliams beginning around 1972. I met him at the A's fanfest a few years ago. He's from here in the Bay Area. That's why you see so many Candlestick poses and entire chunks of AL teams posed at the Oakland Coliseum at the same time of day in Topps sets from the 70's. His work is headed to Cooperstown: