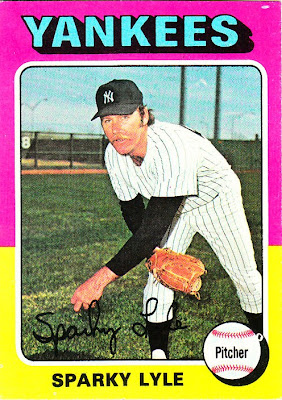 Card fact: This was the second-to-last Yankee card I needed for the set. The last was Graig Nettles. Why do I specifically remember the Yankees? Because they're so blasted difficult to land where I live.

What I think about this card now: There is an "8" hanging from the fence in the background. I'm wondering if that is an "8" for the retired number of Yogi Berra and Bill Dickey. Or maybe it's just a distance marker.

Other stuff: Sparky Lyle was one of the greatest relief pitchers of his time. He was so good in 1977 that he won the Cy Young Award, which rarely happened at the time. But that didn't stop the Yankees from acquiring Rich Gossage to be the Yankees' new closer, eventually pushing Lyle out the door.

Lyle became famous outside of baseball for writing "The Bronx Zoo" in 1979, a tell-all book about his Yankees teammates during their 1977 and '78 championship seasons. It was the first book of its kind that I ever read -- I read it when I was 13 or 14 -- and a real eye-opener into what happened behind the scenes on baseball teams. Especially that part about sitting on birthday cakes.

Before he came to New York, Lyle was a successful closer for the Red Sox. He was dealt to the Yankees for Danny Cater prior to the 1972 season, which proved to be a terrific deal for New York.

After Lyle's Yankee days ended in '78, he went to the Rangers, Phillies and White Sox but didn't have the kind of success he had with New York.

After his career, he made plenty of appearances around the country and managed for a little bit. He even showed up in our town to pitch in a charity event before a minor league game. A guy I worked with hit a double off of him. I believe it was the only hit Lyle gave up in three innings of work. 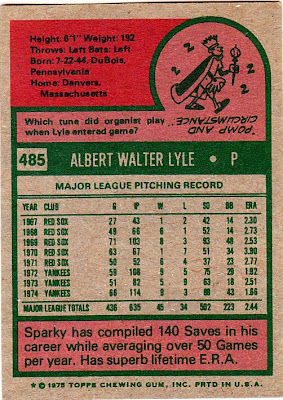 Back facts: Lyle's entrance song was indeed Pomp and Circumstance, which I know as the graduation march. It seems like an odd thing to play when a reliever enters the game, but that's what they played.

Other blog stuff: On this date in 1931, Hal Linden was born. Barney Miller was my all-time favorite show at one point. I miss sitcoms.
Posted by night owl at 3:22 AM

The "8" is part of the distance marker on the outfield wall at Shea. The Yankees played at Shea in 1974 - 1975 while Yankee Stadium was being renovated.

I remember trying to check the Bronx Zoo out of the library when I was about 12 and the librarian wouldn't let me. She said I wasn't old enough to read it.

I think he should have come out of the bullpen wearing that crown and robe carrying a scepter. Very cool.