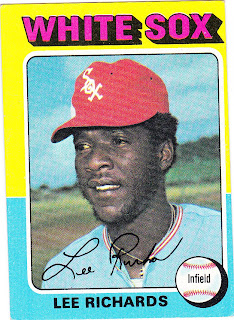 Card fact: This is another name spelling error in the set. On par with the Cuellar/Cueller goof, Lee Richard has no "s" on the end of his name. Thanks to the addition by Topps, I thought his name was "Lee Richards" for a long time.

What I thought about this card then: I, as well as my brother, was amused by the back of the card, which you will see later.

What I think about this card now: I have been questing for a much more centered version of this card for a while. But somehow it always slips my mind.

Other stuff: Richard was known for his electric speed. He was used quite often as a pinch-runner and sometimes almost exclusively. The White Sox selected him sixth overall in the 1970 draft.

Richard played in 87 games, mostly at shortstop, for the 1971 White Sox, but hit just .231 with 17 RBIs. He went back to the minors for most of the next two seasons before re-emerging in '74 as a utility infielder -- which explains the "infield" designation on his card here. 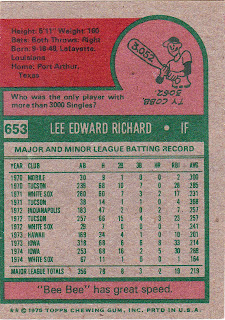 Back facts: Laziness is killing me. I didn't post Sunday, and I missed publishing on Richard's birthday by two minutes. Oh well, it's still Sept. 18 in part of the country.

As for the write-up at the bottom, "'Bee Bee' has great speed," was the single most hysterical thing that I read on the back of a baseball card in 1975. I vividly remember my brother and I with tears in our eyes as we laughed uncontrollably over what we considered such a bizarre statement. I can't fully explain why we thought it was so funny. We just latched onto players with below-average statistics and found whatever we could to ridicule. We were baseball card bullies, I guess.

The "Bee Bee" nickname, by the way, didn't have to do with his speed. Richard acquired it in high school when he was a pitcher, and the name refers to the speed of his fastball at the time.

Other blog stuff: On this date in 1976, Indians player-manager Frank Robinson delivers a pinch-hit single in his final major league at-bat.
Posted by night owl at 12:02 AM

Happy belated birthday to Mr. Richard. Wait, I just realized they spelled his name correctly on the back. That card is so off-centered, I thought it was a Lineage mini for a second.

Perhaps Topps thought he was doing the same thing the Rolling Stones' Keith Richards was doing. For a time in the late 60s and early 70s he was known as "Keith Richard" instead. :)