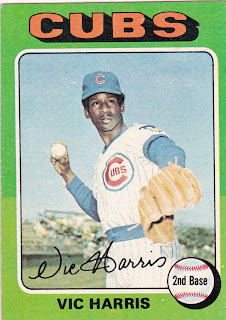 Card fact: This is Vic Harris' last Topps card until the 1978 Topps set.

What I think about this card now: I know the Harris 1978 card well. He's with the Giants. It took me a long time to realize that this Harris and that Harris are the same person.

Other stuff: Harris was dealt to the Cubs along with Bill Madlock in the deal that sent Ferguson Jenkins to the Rangers. Harris was just coming off his best major league season when he played in 152 games as the Rangers' starting center fielder.

Harris was inserted at second base with Chicago, but he didn't hit well and was sent to the minors. When he returned in 1975, he was strictly a utility guy, first with the Cubs and then with the Cardinals, Giants and Brewers.

After 1980, he went to Japan and played for three years before retiring. 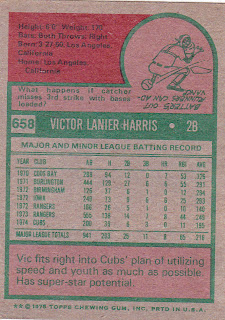 Back facts: "Has super-star potential." Ouch.

Other blog stuff: Jim Henson, the creator of that '70s classic, "The Muppet Show," was born on this date 75 years ago.


"Why do we always come here
I guess we'll never know
It's like a kind of torture
To have to watch this show"
-- Statler and Waldorf
Posted by night owl at 2:33 AM

I had to look him up to see how he did for the Rangers. He had an ok season in '73, but he was only was only successful on 13 of 25 attempts on steals. I like the cards with catcher cartoons, but that's not a positive one is it.

Is it me, or is he a little cross-eyed? Check out his 74 card for further evidence: