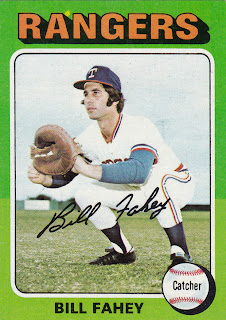 Card fact: This card seems to illustrate to me, more than any other in the set for some reason, how difficult it is to be a catcher -- simply from the stance that the position requires. Personally, I try to avoid squatting as often as I can. And if I have to do so on some rare occasion, I'm instantly happy that I don't have to do that again. But catchers squat hundreds of times in a single game. Either I'm a wimp or they've got a really crummy job (that pays a lot, I realize).

What I think about this card now: I just documented it above.

Other stuff: Fahey was a backup catcher for the Senators/Rangers, who eventually found some offense later in his career. He played a little more often for the Padres in 1979 and 1980, then played three years for the Tigers.

Fahey coached for the Tigers in the minors after his career ended in 1983. He also was a coach for the Giants. He is the father of former Orioles utility player Brandon Fahey, who was with Baltimore between 2006-08. 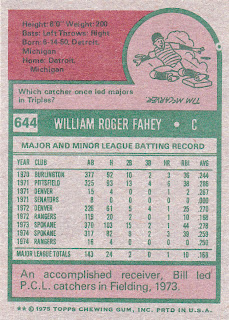 Back facts: I think it's nice they put a cartoon about a catcher on the back of a card of a catcher.

Other blog stuff: Actress Michelle Johnson was born on this date in 1965. I don't bring this up because she once was married to former major league player Matt Williams. I bring it up because I saw "Blame It On Rio" in 1984. And she's never left my head.
Posted by night owl at 12:13 AM

The last Ranger of the set. I don't have this card, but I like it. The whole catcher thing you know. Not to mention that great cartoon on the back.

Oh yea, Blame it on Rio. Michelle and a young Demi Moore.

Sorry, I drifted off a bit. Must have been daydreaming...

THAT Michelle Johnson is 46 years old????

i think i need to lie down for awhile now...