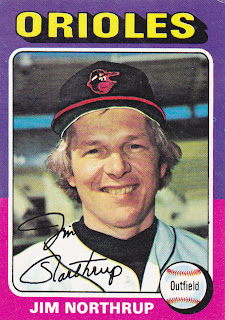 Card fact: This is the final Topps card issued of Jim Northrup during his career. He retired after the 1975 season.

What I though about this card then: Never saw it.

What I think about this card now: It is blatantly obvious that Northrup is wearing a Tigers uniform. But that weirdly airbrushed Orioles cap -- it must've been fun to airbrush the Oriole cartoon bird back in the day -- probably fooled a few kiddies.

Northrup was traded to the Expos in August of 1974. He was then purchased by the Orioles on Sept. 16, 1974 and played eight games for them to close out the year. He played in 84 games for Baltimore in 1975.

Other stuff: Northrup is known for his timely and dramatic hitting with the Detroit Tigers, specifically during the 1968 season, a year in which the Tigers won the World Series.

Northrup, the Tigers' regular right fielder (but he played a lot of center field, too), hit five grand slams in 1968, including one in Game 6 of the World Series that helped Detroit tie up the Series with the Cardinals after trailing 3 games to 1.

Northrup was a streaky hitter who enjoyed his best seasons between 1968-70. He became a regular with Detroit in 1966. In the early '70s when Billy Martin took over as the Tigers' manager, Northrup clashed with the manager, once saying, "He took all the fun out of the game."

After his playing career, Northrup played pro softball, worked as a broadcaster for the Tigers, and in several business ventures. Northrup died three months ago at age 71, suffering from various ailments, including Alzheimer's Disease. 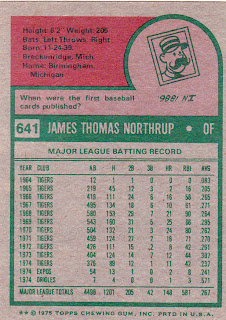 Back facts: Well, that's an interesting cartoon. I'm assuming that by 1886, they're referring to Old Judge cards, which were among the first to be included with tobacco products and sold to consumers. But there were baseball "cards" issued by various businesses going back to the 1860s.

Other blog stuff: On this date in 1918, the Red Sox won Game 1 of the World Series against the Cubs, 1-0, on a six-hit shutout by Babe Ruth. The World Series was moved up a month because of World War I.
Posted by night owl at 12:43 AM

One of the great things about this blog is discovering a player like Northrup who wasn't a fringe guy, but had a meaningful impact on his team and was pretty decent for awhile. I had never heard of him until now so thanks for enlightening me.