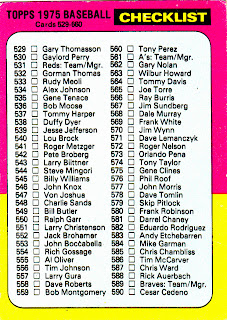 Card fact: This is the final checklist card in the set.

What I thought about this card then: No idea.

What I think about this card now: Nothing that I haven't said already. Checklists don't exactly evoke deep thoughts.

Other stuff: The pink-yellow border combination moves into sole possession of first place with its 55th card in the set. 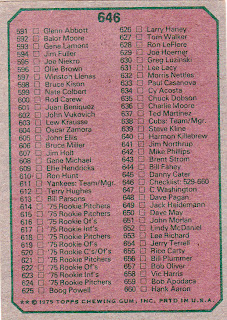 Back facts: I kind of don't like showing the back of this card. It gives you a look at the final cards in the set that I haven't covered. I wanted it to be a surprise.

Other blog stuff: You're going to have to stare at the checklist for a little while longer. I won't be posting on Sunday in memory of the 10th anniversary of 9/11. I'll be back Monday.
Posted by night owl at 2:47 AM

Man, this brings back so many memories. Good ol' #542 and who could forget #567? I didn't look at the back so I could be surprised. Ok, I DID look to see who was on the last card.

Seriously, was there anything more disappointing as a kid than spending your hard earned allowance on a pack of baseball cards and finding that one of the ten cards you pulled out of the pack was a checklist? The horror...

Looks like Topps/You are saving the best for last.

BTW ... what's on deck for when 1975 is finished? (Or have you mentioned in a dozen times already and I've missed it?)

No I haven't mentioned it. But check out tonight's post on Night Owl Cards.