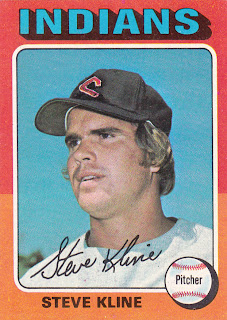 Card fact: This is the final card of Steve Kline issued by Topps during his playing career.

What I think about this card now: He's not really wearing an Indians cap. He's actually a Yankee in disguise.

Other stuff: I'm just speculating here, but it must be deflating to become a major league pitcher, establish yourself for a few years, and then later have another major leaguer come along at your same position with your same name, who enjoys a better, longer career and is a good quote, too.

That's what happened to Kline, whose career lasted from 1970-74 and then 16 more games in 1977. The second Steve Kline was a flaky, left-handed reliever known for his durability with the Expos and Cardinals, who pitched 11 seasons from 1997-2007. They're not related.

The elder Kline pitched for the Yankees from 1970-74. His best season was 1972 when he went 16-9 with a 2.40 ERA. He was dealt to the Indians in the big trade that sent Chris Chambliss and Dick Tidrow to the Yankees in April of '74 (which explains the airbrushed cap). 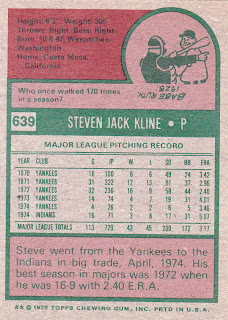 Other blog stuff: Four of the last five red-orange bordered cards (the Burger King color combo) have featured players with airbrushed caps.
Posted by night owl at 12:31 AM

16 wins and a 2.40 ERA is nothing to sneeze at, even if it was with the Yankees. It looks more like Babe is getting tossed than walked.

Kline used to work as a lumber broker here in Portland and we had him as an autograph guest once at a monthly collector trade show. He was a nice guy and the best story he told was how the Army would ferry him via helicopter to games from his reserve unit, since they were trying to do something positive during Vietnam.

A Steve Kline baseball card is literally the first card that I ever got. It was one of those refractor cards that came in a box of cereal (Corn Flakes, I think). It must have been 72 or 73, since that was when he was at the peak of his (modest) major league success, and the only way he would have been on a cereal premium card.

In any case, that makes this Steve Kline a lot more well-remembered than the later one. Although, I did always believe that the later one was the original one's son. Thanks for clearing that up.

Air-brushed uniform or not, I'm betting the elder Kline washed his hat 161 times more often then his namesake of another generation. An obscure reference, but one popular to 21st century STL fans

The Yankees had high hopes for Kline and for a little while it looked like he might come through, but like Stan Bahnsen he ended up a disappointment. At least Bahnsen ended up doing pretty well after the Yankees traded him.