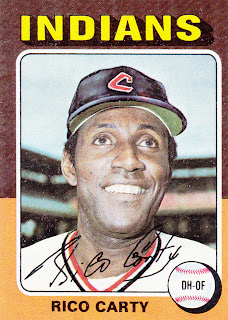 Card fact: Rico Carty is airbrushed into an Indians cap and uniform. I can only guess at what uniform he was really wearing. He played for Texas, the Cubs and Oakland in 1973 and in 33 games for Cleveland in 1974.

What I thought about this card then: Didn't see it. The first Carty card I saw was his 1976 Topps card in that magnificent red Indians uniform.

What I think about this card now: Kind of a dorky grin there. Pleasant enough, but dorky.

Other stuff: Nicknamed "Beeg Mon," Carty could hit from the word go. In his first full season with the Braves in 1964, he hit .330, finished second in the league in hitting and second in the N.L. Rookie of the Year voting.

Carty put up some big years in eight seasons with the Braves, winning a batting title in 1970 with a .366 average (he also knocked in 101 runs and blasted 25 homers), hitting in 31 straight games that year, and batting .342 in the Braves' pennant-winning season in 1969.

But Carty missed two full seasons in 1968 and 1971, the first battling tuberculosis, and the second with a broken knee, suffered in a collision while playing winter ball. Carty was eventually dealt to Texas because of disputes with teammates.

In fact, Carty didn't see eye-to-eye with several famed players, including Hank Aaron with the Braves, Ron Santo with the Cubs, and Frank Robinson with the Indians. Carty revived his career in Cleveland, batting .308 in 1975 and pounding out 171 hits in 1976. But the Indians left him available in the expansion draft.

The Blue Jays selected him, but then traded him back to Cleveland a month later (they faked out Topps, which airbrushed Carty into a Blue Jays uniform in the 1977 set, even though he didn't play for Toronto in '77). Cleveland traded Carty back to Toronto after the 1977 season. Carty then spent the rest of his career with the A's and Blue Jays, finishing in 1979. He set a career-high with 31 home runs in 1978. 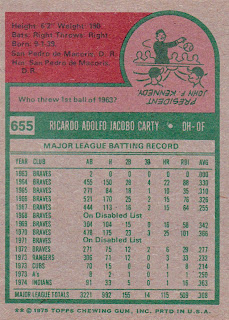 Back facts: Those double "on disabled list" lines are jarring. I noticed Carty's double misfortune on the back of his 1976 card.

Also, that's an adequate attempt on a JFK likeness in the cartoon. I wonder what makes the cartoonist decide to attempt a likeness sometimes but not others.

Other blog stuff: Bill Murray and Larry Hagman were both born on this date. They each were kind of notable in the '70s.
Posted by night owl at 12:50 AM

Almost as jarring as the double disabled list lines is the three teams listed for one season. I wondered if he had a Rangers card and he is terribly airbrushed into a Rangers cap on his 1973 card, but I couldn't find a 1974 card for him.

I did find this play at the plate where he appears to be in an awfully vulnerable slide.

According to Carty's transactions on baseball-reference.com, he was sold twice in the last two months of the 1973 season, was released by Oakland in December 1973, and apparently played much of the '74 season in the Mexican League (the Indians acquired him from a Mexican League team in August 1974).

I'm not sure exactly when Topps would have been putting its 1974 set together, but one or more of the above facts likely explains why he didn't get a card in the 1974 set. Texas had sold him to the Cubs in August 1973, so he wouldn't have been shown as a Ranger in any event.

A year or 2 after his first missed season, Carty made the all-star team as a write-in starter.

Carty is definitely in an AL uniform since this shot is from Comiskey. I can't imagine it's an Oakland uniform but I guess you never know. My vote is Texas.