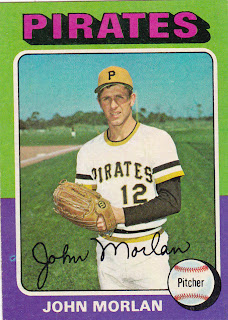 Card fact: This is John Morlan's only Topps card.

What I thought about this card then: I never saw it. No clue who John Morlan was until completing the set in 2004.

What I think about this card now: I give my 9-year-old self a lot of flack for thinking players on cards were a lot older than they actually were. But when I saw this card for the first time, I was a full-grown adult in my 30s, and I thought the 27-year-old Morlan on this card appeared to be in his 50s.

Other stuff: Morlan was signed by the Pirates as an outfielder. But he converted to pitching in the minors. He reported late to the minor leagues each of his first four seasons because he was an elementary school teacher and had to wait until school let out for the summer before he played baseball.

Morlan underwent elbow surgery after the 1974 season and didn't play in the majors after that. He pitched for  Pirates minor league teams until 1977. 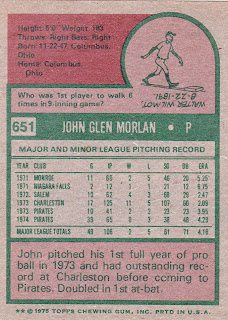 Back facts: If Morlan's first year of pro ball was in '73, then what was he doing in 1971 and '72 for Monroe, Niagara Falls and Salem? Those weren't American Legion teams.

Other blog stuff: A happy 56th birthday to Robin Yount. Yup, the only teenager featured in this set (batboys excluded) is 56 today.
Posted by night owl at 1:39 AM

I remember being excited when school was out for summer because it meant it was time for baseball. Of course, I was 10.

Walt Wilmot still holds the record with 6 walks in a 9 inning game (tied with Jimmie Foxx).

The text on the back of the card actually says 1973 was his first "full" year of pro ball. I think they mean it was the first year he didn't report late due to needing to wait for his schoolteacher job to let out for the summer.

Imagine having a pro baseball pitcher as your teacher. That would have been cool! Hopefully he was a good one.

That's the extent of it. I have some WWB with complete batting stats for a position player turned pitcher. I have another WWB 94 that shows Trevor Hoffman's career as a infielder.