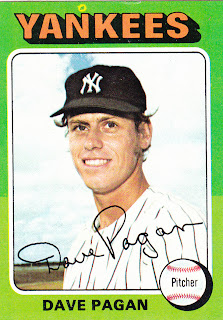 What I think about this card now: He looks like a guy who we would have made fun of as kids.

Other stuff: Pagan was signed by the Yankees in 1970. After time in the minors, he reached the big leagues in 1973. From 1973 through 1975, he bounced between the majors and minors.

In 1976, he was involved in the big June trade between the Yankees and Orioles that included Ken Holtzman, Scott McGregor, Grant Jackson, Rick Dempsey, Doyle Alexander and Tippy Martinez, among others. He pitched ineffectively for Baltimore and was selected by the Mariners in the expansion draft. I know him from his Seattle days, thanks to this amusing card.

Pagan finished out his career with the Pirates in '77 and pitched in the minors through 1979. 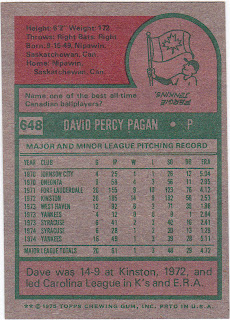 Back facts: I missed posting on Pagan's birthday by two days.

Other blog stuff: Players in this set celebrating birthdays today are Rick Dempsey (age 62) and Rick Wise (age 65).
Posted by night owl at 12:28 AM

He shares a birthday with my sister. Judging what that hat is covering up, he might have the same hairdo.

When Pagan first came up with the Yankees Phil Rizzuto swore he threw harder than Nolan Ryan, so when the Yankees traded him to the Orioles I figured Pagan would have the same kind of success for Baltimore that Ryan had for the California Angels after he got traded by the Mets. It didn’t happen.