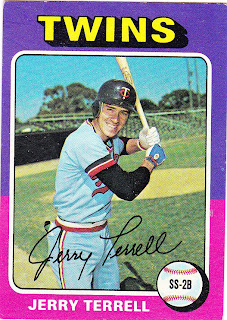 Card fact: This is the last card in the set of a player wearing a powder blue uniform. Yup, we're really nearing the end.

What I thought about this card then: I didn't see it. However, Jerry Terrell has the honor of being the first card pulled by my brother in the 1976 Topps set. I don't know how I remember that. Probably because my brother deemed it the greatest card ever.

What I think about this card now: The smile with the batting stance pose looks odd. How many players are smiling while they're batting?

Other stuff: Terrell was a utility infielder for the Twins and the Royals between 1973-80. He began as a starting shortstop for Minnesota, but after over 400 at-bats in '73 and '75, he sat on the bench a lot more the rest of his career. He could play short, second, third and first, making him pretty handy. He even pitched a couple innings.

Terrell is remembered as the only player to vote against a strike back in 1980. The vote was taken prior to the players eventually walking in 1981. Terrell was the Royals' player representative, but cited religious reasons for being one out of 968 players to vote "no."

After his playing career, he managed in the Royals and White Sox organizations. He also worked as a scout. 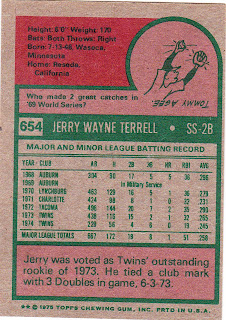 Back facts: Terrell doubled three times off of Mickey Lolich in that game against the Tigers on June 3, 1973. But Lolich won the game and the Tigers beat the Twins, 8-2.

Other blog stuff: On this date in 1907, Nick Maddox of the Pirates no-hit the Brooklyn Superbas 2-1. Maddox was 20 years old and remains the youngest player to throw a no-hitter in the major leagues.
Posted by night owl at 12:58 AM

If I'm Tommy Agee, I'm arguing about the fact there are two balls in play.

A closer look at the stats makes me wonder where Jerry served in the military in 1969.