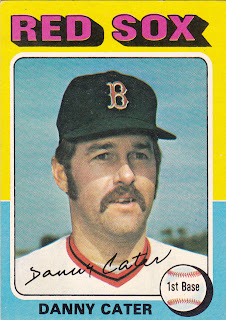 Card fact: This is the final Topps card of Danny Cater issued during his career.

What I thought about this card then: My brother had the mini card. I thought Cater looked old and British.

What I think about this card now: He still looks vaguely British. But not as old.

Other stuff: I know Cater as the guy the Yankees dealt to the Red Sox to land relief pitcher Sparky Lyle. But Cater was a pretty good hitter before that. He was a singles, doubles, batting average guy who started out with the Phillies and White Sox and then hit his prime with the A's. He finished second in the American League in average in 1968 with a .290. (Carl Yastrzemski famously won the title with a .301).

Cater was pretty slow and hit into double plays a lot. After a nice season with the Yankees in 1970, he declined a little and the Yankees picked the right time to pawn him off on the Red Sox. Cater didn't play in a 100 games for any of the three seasons he wore a Red Sox uniform. He finished up with the Cardinals in 1975.

He later worked in the Texas Comptroller's office in his native state. 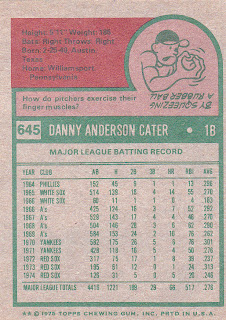 Back facts: I was fascinated by this cartoon as a kid. Did pitchers really do this? Where did they get such a tiny rubber ball? Why was the player so horrified by squeezing a rubber ball?

Other blog stuff: On this date in 1993, major league baseball voted to divide each league into three divisions.

That is a classic '70s mustache.

The way I see it, you only really have two choices. Since there are only 15 cards left in the set, you either need to start posting only once a week OR you need to be scanning the cards from whatever set you're going to cover next. It's up to you, but those are the only serious options.

On a seriously serious note, stay safe and dry (that goes for your parents too!)

Ditto on both of PATP's comments.

I can see something British about Cater here because, in this picture at least, he bears a very strong resemblance to British retired Formula One driving champion Nigel Mansell. Cater was a good hitter, but I remember the Yankees trying to turn him into a third baseman. The experiment didn’t last long. The crosstown Mets were famous for their perpetual void at third base, but at least they had Wayne Garrett, who was OK, and I think underrated. Between Clete Boyer and Graig Nettles the Yankees' third base situation was a black hole.