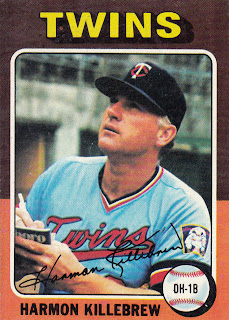 Card fact: This is the final Topps card issued of Harmon Killebrew during his playing career. He had appeared in just about every Topps flagship set from 1955-75 (he's not in the 1957 set).

What I thought about this card then: I had the mini card. I thought he looked pretty old.

What I think about this card now: It's funny how little I noticed when I was a kid. It never dawned on me then that Killebrew is signing an autograph. And, of course, now I recognize that there is a partial tobacco advertisement in the photo. It's really one of the better photos in the set.

Other stuff: I always have trouble writing about the most well-known stars on this blog. What do I say?

I just wrote about Killebrew after his recent death. Killebrew was one of the greats, both as a player and a person. I was just getting to know baseball when Killebrew retired. I never saw him play. I would have been interested in seeing him in a Kansas City Royals uniform, which is where he spent his final season in 1975. But I really didn't actively watch baseball until 1976 or 1977.

It's easy for some to forget that Killebrew was among the top five home run hitters of all-time for quite awhile. Right up there with Aaron, Ruth, Mays and Frank Robinson.

I remember Killebrew mostly as a broadcaster. 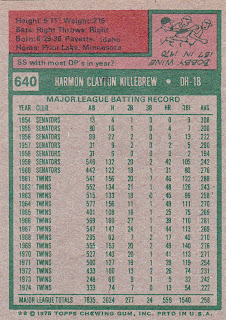 Other blog stuff: This is probably the last opportunity on the blog to show the mini card next to the regular card, so here goes: 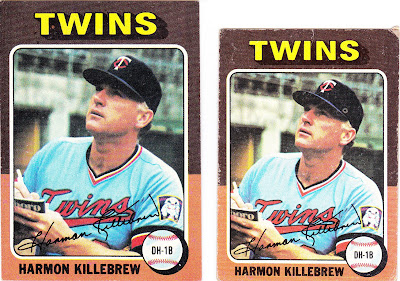 I may have a few more of these for you over on my other blog over the weekend. Stay tuned.
Posted by night owl at 12:50 AM

Why doesn't Killebrew have a card in the '76 set, I wonder.

Killebrew was released by the Royals at the end of the 1975 season. I know Topps tended not to issue cards of players who were released at season's end, especially in a case of someone like Killebrew where the chances were good he wouldn't play again.

He announced his retirement in March 1976.

Nice card. Harmon's one of my favorites.

Harmon Killebrew...a true gentleman of the game, as an active player and in his post-career. Remember him participating in the original Home Run Derby in the 1960's (re-runs, since that was before my TV viewing days). Tim McCarver hosted an interview with Harmon months before his cancer announcement. Wonderful exchage between the two, sad to lose such an ambassador of baseball's past. Oh, and yes, what a great card !

He was one of my dad's favorites. That was an incredible jump in playing time/stats from 58 to 59. I love those cards that are so full of stats there isn't room for a bio.

At first I thought Harmon was a smoker because of the "Marlboro" thing. Later I realized he was signing an autograph.

I first became aware of Killebrew when I saw him suffer a pretty serious injury in the 1968 all-star game. That was my first year watching baseball and the first all-star game I ever saw. I was watching with my father and remember he had quite a reaction to the injury. I was only seven years old, and the injury was one that would look more excruciating to a grown up man than a little kid.