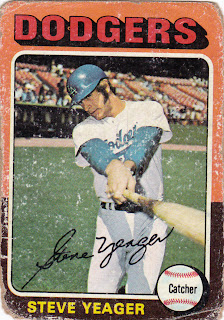 I started this blog for one reason: The 1975 Topps set deserved a blog.

When I first started reading card blogs in the early summer of 2008, I came across several set-related blogs. They captured my imagination. The devotion to the individual card. The love of a set-builder. The fun facts I never knew and the ones I always knew.

But I realized right away that no one had started a '75 Topps blog. That staggered me. At the time, I thought there really was only one set that was interesting enough to catalog card-by-card, and that was the '75 set. I was a bit biased because it was the first set I ever collected. But come on. Look at it. Why in the heck had everyone been able to avoid creating a '75 Topps blog?

As I became a blogger and the months went by, I continued to wait for someone to begin the '75 Topps blog. But no one did. Finally, after a little over a year of waiting, I started one myself on October 14, 2009. All I wanted to do was share my enthusiasm for my all-time favorite set.

But secondly, I became aware of how the blog affected others. People told me that they were inspired to collect the set because of this blog. People sent me '75 cards because they figured I might want some upgrades (I did). Some wacky fellow blogger attempted to comment on every post (you missed one, bud). I was contacted by relatives of players in the set.

I never knew that posting my simple memories of collecting a set would connect with others on such a level.

So, now that it's over, I owe a thanks to anyone who read this, or will continue to read it. Thanks to all the regular commenters like EggRocket, Play at the Plate, steelehere, Johngy, MCT, Jim from Downington, Reivax, Douglas, wobs, MJ, Matt R, Devon, eric c. loy, Roy, Jim, and many others who climbed aboard and joined in with the spirit with which this blog was intended.

A special thanks to Andy for being the inspiration for this blog as his 1988 Topps set blog was the first of its kind that I ever saw. And thanks to wobs again for devoting several cards to the cause.

Thank you to all who corresponded by email, a number of whom never commented on this blog. I appreciated your kind words. Some of your personal stories relating to this blog actually brought tears to my eyes.

The '70s were a wonderful time to be a kid and collect and I will always remember that when I look at my '75s. And now when I look at this blog in retrospect.

I'll be taking a break from starting a second blog for awhile. I don't know how long that break will be. You could see another set blog pop up in a week or you could see one pop up in 2012. I don't know. I'm guessing in about a month you'll see something new.

Catch you on the flip side.
Posted by night owl at 1:06 AM

I'll miss the nightly posts. It was an oasis for me too. I could always count on having at least one more post to read late at night (along with Cards on Cards posts usually) after I had caught up on everything else for the day. Enjoy your break from two blogs!

This blog of my birth year set (and the second 70's topps set I put together) was top drawer. I will miss the (nearly) nightly updates, but I am sure sometime when I am incapacitated by flu or broken limbs, I will take great pleasure in revisiting the whole thing. Thanks Greg!

Looking forward to your new endeavor. Thanks for providing us with a fun diversion nearly every morning. It was always great to see a new card and it was always disappointing when you missed a day.

Take as much time as you want. I'll be here when you come back.

This blog has always been the first card blog I would check every morning. In fact, I used this blog as a portal to all the other card blogs, including your flagship.

I'm glad that you felt that writing this blog was an oasis for you. Reading it was definitely an oasis for me, as it was, I'm sure, for others.


For better or worse (worse) card collceting will never again be what it was in 1975. This blog helped recreate some of the magic for me.

Enjoy your respite, I look forward to your next project.

With this blog ending, I'm left to anticipate the start of your next set blog. In a strange way, I feel like a teenager who's eagerly anticipating the arrival of the next Twilight Movie or Harry Potter book.