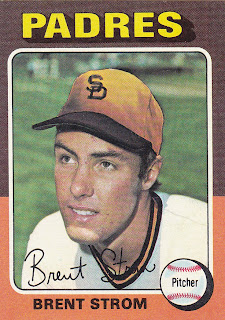 Card fact: Brent Strom is wearing an airbrushed Padres cap (a not very accurate one, too). He was likely wearing an Indians cap, or less likely, one from a minor league team.

What I thought about this card then: Ladies and gentlemen, as kids we may have made fun of other players' cards more, but there was only one card of a player we made fun of first. And that card was the '75 Topps Brent Strom card. I specifically remember my brother and I mocking his name -- overemphasizing the sound it made when you pronounced the first name and last name together. It didn't help that he was wearing that weird painted cap and that his career ERA on the back was 5.06 or his career record was 2-13.

What I think about this card now: It's really not so bad. Except for that airbrushing job.

Other stuff: Strom was a star pitcher for national champion USC in college. He eventually signed with the Mets as the third pick overall in 1970. After three years in the minors, he came up with New York in 1972 and went 0-3. The Mets dealt him to the Indians after the season.

Elbow injuries got in the way and Strom was released. He pitched in the minors through 1981, including a final year in the Dodgers organization (I remember seeing him the minors in Albuquerque and recalling our childish mocking with chagrin). He later became a pitching coach for several minor and major league teams, and is now a pitching instructor for the Cardinals. 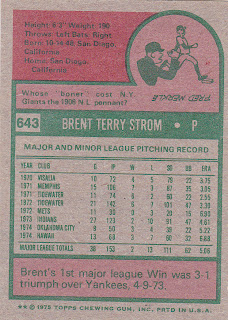 Back facts: I'm a little curious as to why Strom got a card in this set. He didn't play in the majors at all in 1974. We noticed this as kids, spotting the Oklahoma City and Hawaii team names.

Other blog stuff: On this date in 1975, the Reds clinched the division -- the earliest clinching in history. And people complain that there are no pennant races in today's game.
Posted by night owl at 12:53 AM

Hey, at least the color coding was close.

I know we're supposed to be grownups here, but I really don't want to know anything about Fred Merkle's boner.