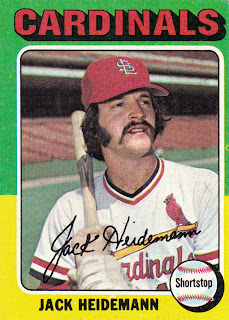 Card fact: This is the only Topps card of Jack Heidemann in which he's featured wearing long hair and a mustache. From 1970-73, he's clean-shaven. When he reappears on a Topps card in 1977, he's also clean-shaven.

What I think about this card now: When I was trying to complete the set in 2004, this was the first card I came across in which I had never heard of the player. This was absolutely stunning to me. I had prided myself on knowing 1970s players, especially from the period when I collected as a kid. I didn't think it was possible that there were players in the '75 set that I didn't know.

It turns out there was more than Heidemann. There are probably 30-40 players in the set in which I had never heard of them until I completed the set in 2004. But that's the fun of collecting cards.

Other stuff: Heidemann was a first-round draft pick of the Indians and played the 1970 season as Cleveland's starting shortstop. In 133 games and 445 at-bats, Heidemann hit .211 and struck out 88 times. His playing time decreased after that, partly because of an inability to hit and partly because of injury.

He played with Cleveland through 1973. With the Cardinals in 1974, he enjoyed his best year, which probably explains Topps giving him a card in '75 after no card in the '74 set. He then went to the Mets and was used as a utility infielder both by New York and the Milwaukee Brewers between 1975-77. 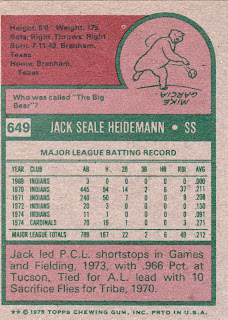 Back facts: This is the last cartoon in the set featuring an animal.

Other blog stuff: In case you don't read Night Owl Cards, I announced over there that after this blog is finished, I will be doing another set blog. However, I won't be starting it right away. I need a break from doing two blogs.

I'm reasonably sure which set I will feature once I decide to start another blog. But I'm not ready to reveal that now. Stay tuned.
Posted by night owl at 12:46 AM

Was he the non-pitcher with the least ABs to get a card in the set? Giving him a card was a real stretch and I'm not surprised you missed him for nearly 20 years.