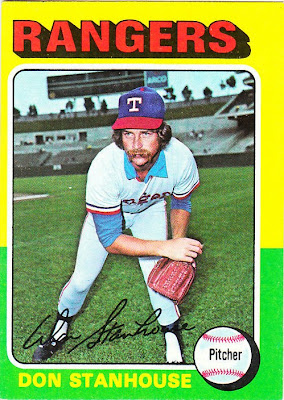 Card fact: Don Stanhouse returns to Topps after sitting out the '74 set. He made his debut in the 1973 set.

What I think about this card now: Good god, look at that mustache. How in the hell did he feed himself?

Other stuff: Stanhouse became remembered as the closer for the 1979 World Series finalist Baltimore Orioles. But before his time with Baltimore, he served as both a starter and reliever for the Rangers and the Expos.

Stanhouse was an all-around star athlete in high school and began his career as an infielder. He didn't have great success with the Rangers and was shipped to Montreal in the Willie Davis deal prior to the 1975 season. After a year of inactivity, Stanhouse enjoyed a decent 1976, starting 26 games and going 9-12. The following year, Montreal switched him to the bullpen and Stanhouse responded with his best season, going 10-10 with 10 saves.

Baltimore than acquired him and Gary Roenicke in a deal that sent Rudy May and Bryn Smith to the Expos. Stanhouse was installed as a full-time reliever and quickly became known for his flaky behavior. He had an unsual pitching delivery in which he held the ball forever before sending it to the plate. Hitters hated it. He was nicknamed "Stan the Man Unusual" and "Fullpack" because manager Earl Weaver would go through a pack of cigarettes while watching Stanhouse work himself in and out of jams on the mound.

I remember broadcasters yukking it up as TV showed Weaver hiding in the hallway between the dugout and the clubhouse, sneaking a cigarette because he couldn't stand to watch Stanhouse pitch.

After the 1979 season, the Dodgers acquired Stanhouse in its first big entry into the free agent market. Stanhouse hurt his back and tanked, with an ERA over 5.00 in 1980. He didn't even pitch for L.A. in 1981. He came back to Baltimore for a season in 1982, but struggled again and his career ended.

Stanhouse is now a venture capitalist and an entrepreneur, married for almost 30 years and the father of three grown children. And the mustache is gone. 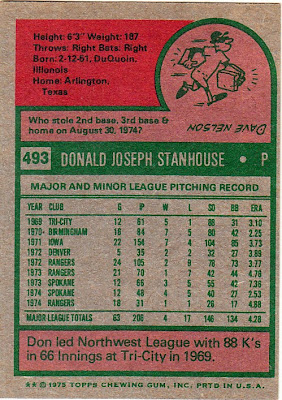 Back facts: I don't know why they didn't use this cartoon on Dave Nelson's card.

Other blog stuff: This is just the 16th yellow-green bordered card. That is four fewer than the next lowest border color total.
Posted by night owl at 12:52 AM

Yeah, he liked to have a good time.

Your reaction to his mustache really made me laugh. That thing must have been awfully distracting when Weaver went out to the mound.