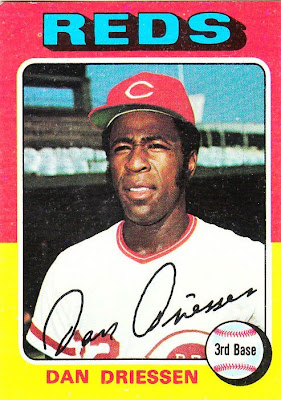 Card fact: The seventh card, so far, of a player whose initials are the same letter. Four of the first six are the initials B.B. (Bert Blyleven, Buddy Bell, Bobby Bonds and Bill Bonham). The other two are W.W. (Wilbur Wood) and L.L. (Lerrin LaGrow).

What I think about this card now: That is a lousy photo. "OK, now, I want you to just stand and squint into the sun. Perfect!" Click!

Other stuff: Driessen was an overshadowed member of the Big Red Machine. He started for the Reds at third base in '73 and '74, but during the Reds' glory days of 1975 and 1976, Pete Rose took over at third base and Driessen was relegated to a back-up role. When Tony Perez departed for Montreal, Driessen took the starting job at first base for the Reds and played quite well there for several years. But the Reds never returned to the World Series during that time.

As much as I disliked the Reds then, I felt bad for Driessen. He was a starter for all but the Reds' very best seasons. 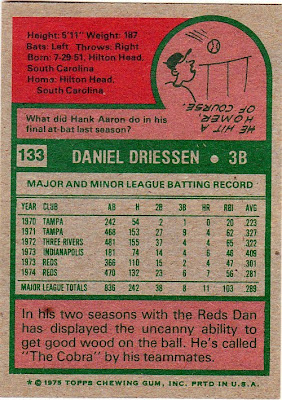 Back facts: I don't know why the caption on the cartoon says "of course." It's not like Aaron could hit a home run anytime he wanted.

Also, I wonder who was nicknamed "The Cobra" first -- Dan Driessen or Dave Parker?

Other blog stuff: Today's birthday: Kent Tekulve is 63 years old today. We like Teke.
Posted by night owl at 2:42 AM

I once scraped my knuckles on the sidewalk trying to pitch like an over exaggerated Kent Tekulve. I know, you're wondering why I was pitching off the sidewalk. I don't remember. I just remember my two friends literally fell over laughing. Good times...good times.

Driessen was a good hitter, but it didn’t take long for Sparky Anderson to get his iron glove away from 3rd base. That’s how Pete Rose ended up at third.