Card fact: Steve Brye is in an almost identical pose on his 1977 Topps card. You could put those photos side by side and do one of those exercises in Highlights magazine in which you have to find 5 things different about the two pictures.

What I thought about this card then: Not a lot. But my brother, who had the card, apparently had some thoughts. More on that in a second.

What I think about this card now: More tilting in the background.

Other stuff: Steve Brye was a fourth-outfielder type for the Twins, as well as the Brewers and Pirates. His only true season as a starter was 1974 when he played in 135 games. He played through the 1978 season.

But he is a big part of my childhood because my brother chose to make Brye the favorite player of his stuffed lion. I mentioned this before on the other blog. It drew a reaction from one of Brye's relatives. Someone who is married to Brye's cousin dropped me an email telling me she was entertained by the story and wondered why Brye was the "lucky" player chosen by my brother. I told her I had no idea. What's more, I don't think my brother would have an idea either. We were ages 9 and 7 at the time. Kids make no sense then. 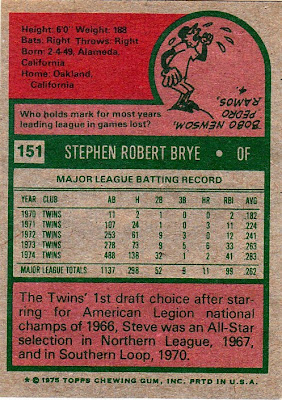 Back facts: If I wasn't so tired and ready for sleep, I would look up whether the record for most years leading the league in losses is still four. Someone please do it for me.

The first copy of this card I ever owned was cut out of a Dynamite magazine. The card was next to the fold and I didn't do a good job of cutting it out, so it was badly misshapen. I wish I still had the card.