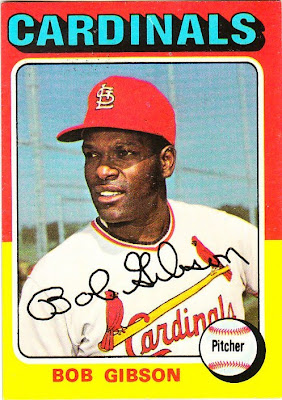 Card fact: This is the final card of Bob Gibson during his career. Of course, through the magic of the hobby's never-ending retro craze, there are many, many new cards of Gibson long after his retirement.

What I thought about this card then: Never saw it. Even though he appears on one of those MVP subset cards that I saw when I was a kid, Gibson the player never registered when I was youth. Legendary baseball writer Roger Angell introduced me to Gibson many years later.

What I think about this card now: I acquired this card early in my quest to complete the set about six years ago. A person at work traded it to me. It's in surprisingly good shape and I didn't give up much to get it. I was quite pleased with the deal, which also brought me the '75 Lou Brock card.

Also, what a great color combo to use with Gibson! It works perfectly.

Other stuff: If I was forced to come up with my favorite pitcher of all-time who was not a Dodger, I think I'd pick Gibson. I absolutely admire his domination and his refusal to back down to the hitter. I love his no-nonsense attitude and his unwillingness to compromise. The game was survival to him. He wasn't making a conscious effort to be intimidating. He was doing what he thought he had to do to succeed. But, make no mistake about it, "Hoot" was mean to opponents and surly to teammates.

Gibson's final season was in 1975. He went 3-10 with an ERA over 5 and he announced that he would retire at the end of the season. In his final appearance, he came on in relief in a 6-6 game and surrendered a grand slam to Pete LaCock that won the game for the Cubs. According to his wikipedia page, Gibson said, "When I gave up a grand slam to Pete LaCock, I knew it was time to quit." 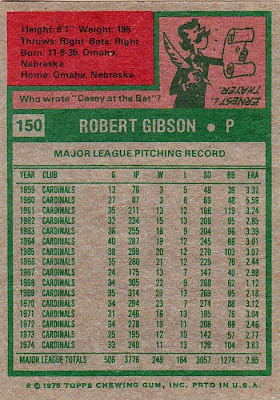 Back facts: Not too many losing seasons in there. Between 1960 and 1974, he won more games than he lost every year.

I once asked my dad about Bob Gibson and all he said was "that G**Da** plate belonged to Bob Gibson and you better not forget it." That didn't make much sense to me when I was 12, but now it does.

Last year I bought a collection of Angell's baseball articles (called "Game Time", I believe), and the Gibson article was one of them. Great read.