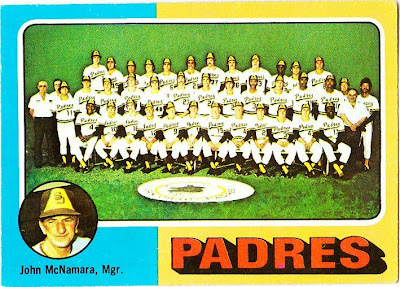 Card fact: This is John McNamara's first appearance as the Padres' manager on a baseball card. He replaced Don Zimmer, who was let go after a 60-102 season. McNamara managed San Diego to the exact same mark in 1974, yet got to keep his job.

What I thought about this card then: I thought McNamara looked like an elf.

What I think about this card now: McNamara is still somewhat elfian, but I'm also distracted by the guy on the right with what appears to be a towering mound of hair. Or maybe it's a shadow.

Other stuff: McNamara started his major league managerial career with the A's in 1970, but my first encounter with him was with the Padres. I didn't like him much when he managed the Reds, and liked him a little more when he took over for the Red Sox. Of course, Boston fans don't have much nice to say about him. And Dave Stapleton really has unkind things to say about McNamara. Let's just say he thinks he should have replaced Buckner on defense in Game 6. 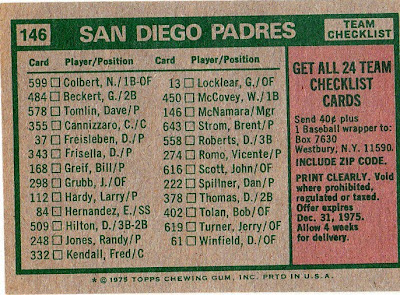 Back facts: Nate Colbert is listed on the Padres checklist, but he is listed as a Tiger on his own card. He was traded to the Tigers on Nov. 18, 1974.

Other blog stuff: Time to see if Topps left any key Padres players out of the '75 set.

The Padres used 43 players in 1974. That is the most of any of the teams we have seen so far. San Diego was five years removed from expansion and absolutely sucked. The Padres didn't even have a winning season until they had existed for 10 years. So they threw a lot on the wall and hoped some of it stuck.

Out of the 43 players, Topps featured just 24 in the set. That is just 55.8 percent, the worst percentage so far. Also, three of the players from that '74 team are featured with other teams -- Colbert (Tigers), Steve Arlin (Indians) and Clarence Gaston (Braves). But two of the players in the Colbert trade -- Ed Brinkman and Dick Sharon -- remained Tigers in the '75 set, cutting down even more on the number of Padres in the set. Topps did try to make up for that by featuring two airbrushed Padres who didn't even play for the team in 1974 -- Danny Frisella and Brent Strom.

Topps didn't really leave out anyone notable. The biggest ones were pitcher Mike Corkins (25 appearances) and two hitters at the end of their careers -- Horace Clarke (90 at-bats) and Matty Alou (81 at-bats).

So the Padres sink to the bottom (a position they should know well) as far as the percentage of players representing their team in the '75 set. There were just too many comings and goings for Topps to handle:

It's interesting that the players aren't quite listed alphabetically. They must have had some last minute changes in the checklist.

I think the "hair" guy on the right left his cap off on purpose...that would be a nice TTM to get on that card if he would circle his head or something.

The player with the hair/shadow is Bobby Tolan. I like that he seems to be smiling - I don't think he got to do that so much back then.