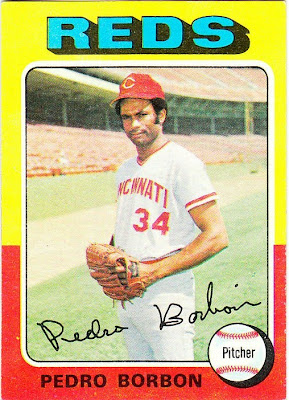 Card fact: I just looked up all of Borbon's Topps cards. He is not smiling on any of them. None.

What I thought about this card then: I did not like Pedro Borbon as a kid. He played for the Big Red Machine, which I hated. And he had that damn Grinch look on his face all the time. He seemed most unpleasant. I wished him ill.

What I think about this card now: I'm not as anti-Borbon as I once was, but I'm still wondering why he couldn't muster a smile for a single card.

Other stuff: Pedro Borbon was a reliable relief pitcher for the vaunted Reds teams of the 1970s. He put up some impressive season win totals for a reliever, which is a testament to his offense.

Borbon's son, also named Pedro, pitched nine years in the majors, including a season for the Dodgers in 1999. I wasn't aware he lasted so long in baseball.

1. The "Airplane" movie line: "Pinch hitting for Pedro Borbon, Manny Mota ... Mota ... Mota."
2. The fact that he tore apart a Mets cap with his teeth during the 1973 NLCS Rose-Harrelson brawl between the Reds and Mets. 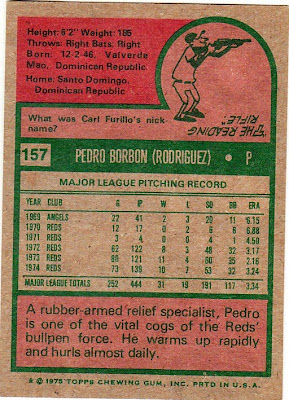 Back facts: I should keep track of how often the Dodgers are mentioned in the cartoon. It has to be almost in double figures now. There are also a lot of guns in these cartoons.

Other blog stuff: Shirley Partridge, a.k.a., Shirley Jones, was born on this date in 1934. The Partridge Family actually was off the air by 1975. Fortunately, I have never seen an episode.
Posted by night owl at 2:19 AM

A couple of card-back points.

1. I may be showing my cultural stupidity, but what's up with (Rodriguez) in parenthises?
2. I wonder how many cards in Topps history have the word cog on them? I'll bet it's not many.
3. I hate hurling...I would really hate doing it ever day.

this little article on pedro from baseball digest will confirm the 'anger' : )

Hi, this Pedro Borbon's daughter, Gabriela.. to this day.. it sometimes takes alot of work to make him smile in pictures.. ;) But when u get to know him hes all JOKES.. even when he is saying a joke he don't laugh..which makes it funnier..

Thank you for your comment. I think the serious look added to my perception of how competitive he was, which I'm sure batters saw, too.

Sounds like he has a dry sense of humor, which I find very funny, too.