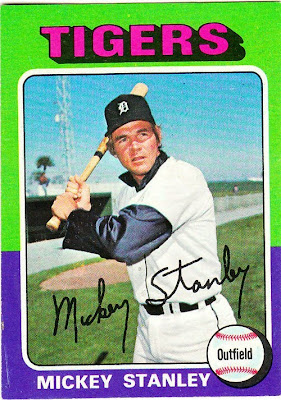 Card fact: We finally have arrived at one of the cards that came out of the first packs that I ever bought.

What I thought of this card then: Stanley was one of three Tigers that I pulled out of those first packs. John Hiller and Ron LeFlore were the other two. Because of that, I became a closet Tigers fan. I still like the Tigers to this day, probably because of the fortuitous collation on that spring day in 1975.

Also, I thought Stanley was very old. He looked like someone my dad would know. But Stanley was all of 32 years old at the time of this card's making.

What I think about this card now: That is an awfully small bat that Stanley is holding.

Other stuff: Stanley was known as an outstanding fielder and his biggest claim to fame is being moved from outfield to shortstop to replace the weak-hitting Ray Oyler for the Tigers' pennant stretch run in 1968. Even though Stanley had never played at shortstop, he performed well there and the Tigers ended up winning the World Series.

Stanley's wikipedia page praises him thusly: "He is considered a living legend to many Tiger fans around the universe." The universe? I don't know. I think that guy on Saturn is a White Sox fan. 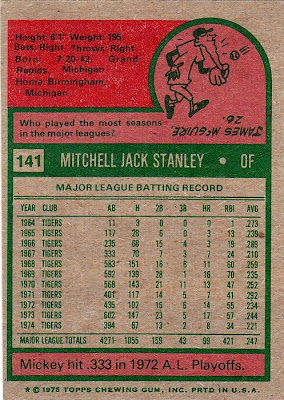 Back facts: Another cartoon figure with a beard. That's two in the last four cards.

Other blog stuff: Happy birthday to Mickey Hatcher! Another Mickey! One of the heroes of '88 is 55 years old today.
Posted by night owl at 2:09 AM

Does anybody know how many people have broken the record mentioned in the cartoon? I think Nolan Ryan played 27 seasons in you include the three innings he pitched in 1966.

According to baseball-reference, Ryan and Cap Anson hold the record with 27 seasons. I don't know why Anson wasn't mentioned in the cartoon. Perhaps he wasn't considered a "modern era" player.

McGuire and Tommy John are next with 26.

Is that a person in the background? I wonder how many cards from this set feature guys with their warmup jackets under their jerseys.