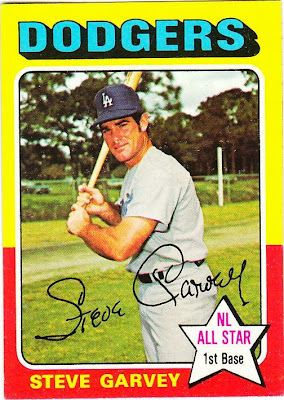 Card fact: This is the first All-Star card I ever saw.

What I thought about this card then: This is one of the all-time coolest cards of my early collecting life. I had the mini Steve Garvey card, and for a long time, I never saw the regular-sized Garvey. When I finally acquired the regulation size Popeye, it seemed freakishly big and somehow so wrong. It took a long time getting used to it.

What I think about this card now: It's still a classic. Garvey's stance is instantly recognizable and I love the trees in the background.

Other stuff: I could write a long time about Garvey, but I'll keep it short. He is the first star of my favorite team that I ever knew. Garvey was just beginning to break out as I was beginning to learn about baseball. Although he was hugely popular with a lot of fans, he was never my favorite player. He was just too smooth and clean-cut for me. I preferred the guys with long hair and mustaches. When Garvey and Don Sutton got in that brawl in 1978, I was both horrified that players on my favorite team would bicker and also pleased that someone on Garvey's own team saw him as a bit irritating. Sutton won more of my respect on that day.

That's not to say I was totally down on Garvey. I was proud to have him on my team and sad when he left. Garvey was a tremendously clutch hitter and watching him during the 1978 postseason was awesome. He seemed to hit everything. He had a mechanical way about him, but he was awfully good.

I always remember him as a young guy. It's sad to know that he is 61 years old. 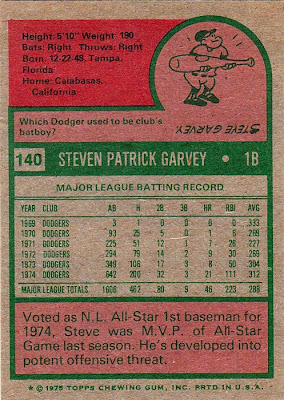 You'll note that 1974 was Garvey's real break-out season and he reached the All-Star Game that year through write-in ballot.

Other blog stuff: Here is the regular Garvey and mini Garvey (overhandled by a 9-year-old) side by side. 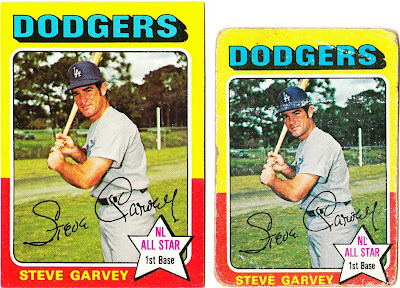 Also, it's time to fill in the All-Star team with Garvey's addition:

Although I hated the Dodgers I had a grudging respect for Garvey. He seemed like a sure-fire HOFer in the 1970s. I figured he had to be good if he had those "all star" things on his cards every year.

Garvey is one of my fave players to collect. Still have my original '75 card and '74. His '75 I think was one of the cards from my first few packs. It seems to be one of my first few '75s I owned. Maybe I'm just being sentimental for a really nice looking card.

I was a fierce garvey fan and believed the hype. The 75 csrd is kind of middle of the pack for me though.

If someone told me in the late 70s or early 80s that in 2010 Garvey would NOT be in the HOF I wouldn't have believed them. A 10-time all-star, Garvey garnered MVP votes nine different years, including five top-6 finishes. He was also a career .294 hitter and was just a bad call away from 2600 hits.

He was probably just a tiny bit slow to start his career and he may have hung up his cleats just a couple years early. But he certainly is on the short list of the greatest players ever to play the game who are NOT in the Hall.

Steve will always be a Dodger to me. I never did like seeing him in any other uniform.

It's so odd to me that Jerry Hairston, Jr. can wear the #6 for the Dodgers, yet the Padres have retired it. I know Garvey was a key figure in the Padres 84 run to the Series, but this reeks of San Diego trying to force a history.