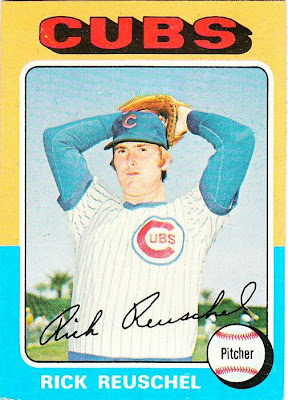 Card fact: This card is a real disappointment coming after Rick Reuschel's 1974 card. But I guess Topps had to ration its action shots in the 1970s.

What I thought about this card then: Never saw it. It does look like a card I would make fun of though. Sorry, Rick.

What I think about this card now: Well, not so much the card, but the name. I am much relieved that I have been pronouncing Reuschel's name correctly all these years. It is indeed, RUSH-el. I was never sure about that.

Other stuff: When I think of Rick Reuschel, I think of how he had some good years for the Cubs, then went to the Yankees and things fell apart. Even when he returned to the Cubs, things didn't go well. It wasn't until he signed with the Pirates and then when he joined the Giants that he regained his form that he had during his first stint with the Cubs.

I also remember him appearing to grow larger and larger as his career progressed. He was always a portly fellow. His nickname was "Big Daddy." I noted that he is listed as 6-3 and 230 pounds on his 1975 card, and 6-3 and 240 pounds on his 1991 card. But he seemed to me to have gained more than 10 pounds during those latter years. 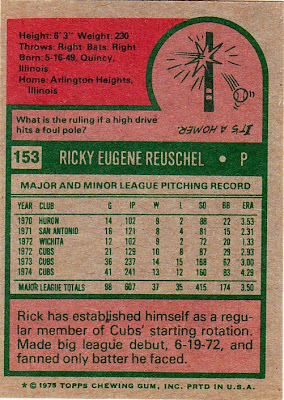 Back facts: How many people do you know whose full, given first name is "Ricky"?

Other blog stuff: More birthday items. Mariah Carey is 40 today. Wow. Time is moving much too fast.
Posted by night owl at 2:21 AM

Big Daddy was awesome, though the Sox fans in my family had a different nickname for him, "Whale." Despite his size, Reuschel was a good athlete, and was even used as a pinch runner a couple times.

Pauley Perrette is 41 today. I never would've thought that. 28 maybe.
On the plus side, I won a bet with my wife over that, and now she has to cook dinner for the next two nights. Yay me.

Big Daddy was an important part of the Bucs rotation from '85-'87. When he was traded to SF we got Jim Gott and Jeff Robinson who became our closer and setup man respectively. Reuschel was the '85 NL Comeback Player of the Year and was the starting pitcher for the NL at the '89 All Star Game.

He made his major league debut on the same day (although many years earlier) that my son was born. And I can't believe Mariah is 40. Well, most of her anyway.