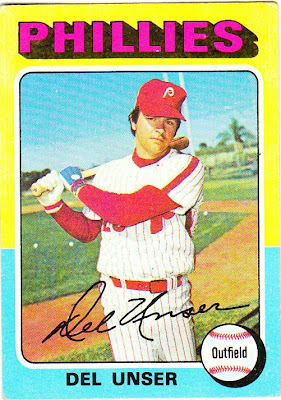 Card fact: What is with the Phillies and players whose last name starts with "U"? There has been Del Unser, Chase Utley, Tom Underwood, Bob Uecker. I mean, in the history of the major leagues, there aren't a lot of players who had a "U" kicking off their last name, but the Phillies seem to have ended up with more than their share.

What I thought about this card then: I remember having an inexplicable interest in Del Unser, but it wasn't because of this card because I didn't have it. It might be the 1976 card, when he was with the Mets.

What I think about this card now: More ballfield tiltage in the background.

Other stuff: Unser began his career with the Senators and was a regular center fielder for several years, both with Washington and then with Philadelphia. Then, about the time he moved on to Montreal, he became known as a pinch-hitting specialist. The rest of his career he was a pinch-hitter and role player. He set a record in 1979 when he hit a pinch-hit home run in three straight at-bats. 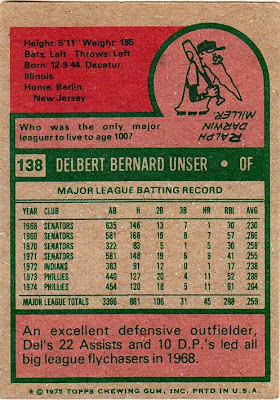 Back facts: I wasn't able to find out if there were any more former major leaguers who lived to be at least 100, but if you want to read an involved analysis of the life expetancy of major league ballplayers, I stumbled across one. The condensed version: MLB players live five years longer than the average American male.

Other blog stuff: The No. 1 song in the country on this date was "Have You Never Been Mellow," by Olivia Newton-John. I'm fairly certain that song title is grammatically incorrect.
Posted by night owl at 2:32 AM

Also...
Good lord...thanks for breaking down that life expectancy thing for us. It was pretty tedious.

Like on the 1960s' Batman TV show, where the villains were always filmed on an angle!