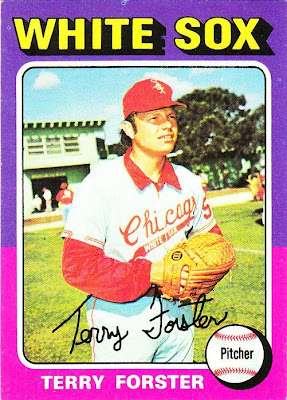 Card fact: The card facts are getting harder and harder to come by -- did you know Terry Forster is tied with Dave Collins for the most years spent in the big leagues for anyone born in South Dakota with 16? You do now.

What I thought about this card then: Not in my collection.

What I think about this card now: Forster has quite the hopeful expression on his face, especially considering the world is going downhill behind him.

Other stuff: Forster earned a quick reputation as a top-notch relief pitcher, spending just 10 games in the minor leagues, and leading the league in saves with 24 in 1974. Later, he was sent to the Pirates with Rich Gossage in a deal that brought Richie Zisk to the White Sox. Then he became one of the Dodgers' first signings of the free agent era.

Forster had a good first season for L.A., but then struggled with injuries. He's the guy that gave up the home run to the Giants' Joe Morgan in the final game of the 1982 season that knocked L.A. out the playoffs. Morgan famously pumped his arm while rounding the bases as if he had just won something -- when actually all he had won was a game and third place in the NL West standings. Nice work, Joe. The Dodgers still finished ahead of you. Oh, and your broadcasting sucks, too.

Later Forster became known for his weight and was called out by David Letterman on national television. Letterman dubbed Forster a "fat tub of goo." I remember watching Letterman at the time and marveling at what a random thing for Letterman to say, to just pick out this relief pitcher that few people knew and riff on his weight. But, as usual, it was funny. 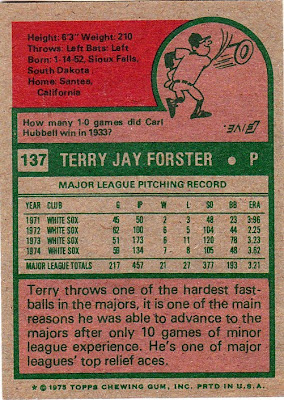 Back facts: The cartoon doesn't say so, but I'm pretty sure those five 1-0 games by Carl Hubbell didn't involve any relief pitching.

Other blog stuff: A moment to acknowledge the passing of Willie Davis, one of the greatest outfielders the Dodgers ever had. An incredible natural talent. Goodbye 3-Dog.

A couple of things.

Second, I don't really remember Hall of Famer Joe Morgan (aren't you required to say that anytime you say his name) as a player, but I guess he was an ass then too. Some things never change.

I'll always remember Forster for his rift with Letterman, who also called him a "silo". Forster replied by calling Dave "Johnny Carson's Janitor." I remember that it was a pretty big event when the two were going to end their fued on the air. Forster was invited on Letterman's show to cook chicken enchiladas.