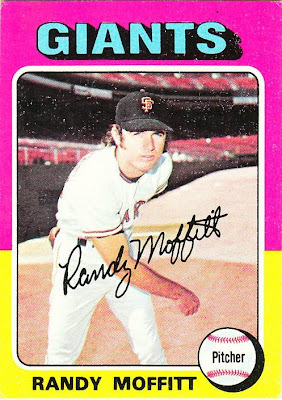 Card fact: This the 10th pink-yellow card. Orange-brown and green-light green are the only two other combos in double figures.

What I thought about this card then: Nada.

What I think about this card now: Nada. Sorry, it's a very boring card.

Other stuff: Moffitt was a relief pitcher his entire 12-year career, starting just one of 534 games played. He played all but two years for the Giants.

Moffitt is the younger brother of tennis great Billie Jean King. It's mentioned on several of his cards, although not this one. When King played Bobby Riggs in the famous "Battle of the Sexes" match in 1973, he made $2 bets with teammates that his sister would win, and apparently he won big. 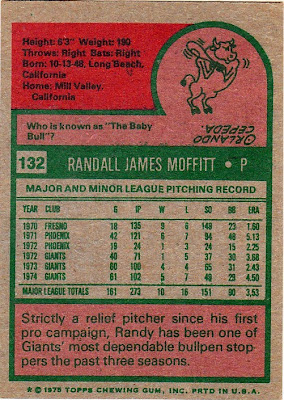 Back facts: A cartoon about a Giant on the back of a Giants' card. I don't like this card at all.

Other blog stuff: Hey! Happy birthday to Leron Lee (card #506), who is celebrating big No. 62 today. Lee's gotten quite a bit of play on the other blog lately.
Posted by night owl at 1:14 AM

Last year I bought a lot of autographed pictures, 1 each of Bobby Riggs and Billie Jean. I also still have a copy of Rigg's book, "Court Hustler". I smell a tennis post!

I'm sorry, but that is one ugly card. I imagine as a player (some players anyway), you get excited, knowing you've got a card coming out and then bam!! you see it and it's PINK and YELLOW. Wow.