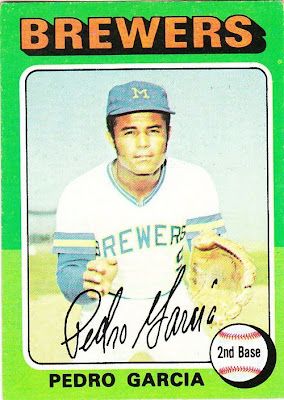 Card fact: This card officially puts the green-light green combo into the overall lead with 16 cards. The orange-brown combo had led from the beginning all the way to this point. Truly a momentous day! We'll have to see if orange-brown can re-take the lead.

What I think about this card now: This was one of the cards that I saw for the first time when I was trying to complete the set a few years ago. When I read the name, it sounded familiar to me. But the more I thought about it, the more I realized I had absolutely no knowledge of this player.

Other stuff: Pedro Garcia made a big impact with the Brewers in his debut, finishing the season with the league lead in doubles with 32 and coming in second in the American League Rookie of the Year voting. But his season was very Angel Berroa-like. Low on-base percentage, lots of strikeouts, few walks. Garcia declined quickly and was out of the majors by 1977. Unfortunately, Berroa is still sticking around. Damn expansion. 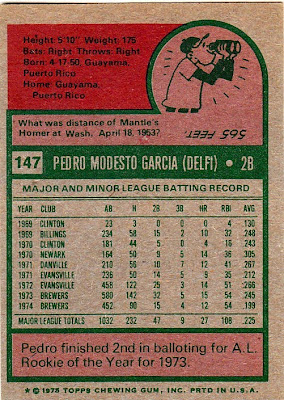 Other blog stuff: The Disney movie "Escape to Witch Mountain" was released on this date in 1975. I thought that movie was very cool when I was kid. One of the first movies I ever saw. No, DVDs back then, kids. We went to the theater.
Posted by night owl at 2:29 AM

#1, the green/light green is my least favourite colour combo...

#2, the little blonde girl in the original escape from witch mountain was Little Canuck's first crush.
Dang she was cute.

Poor Pedro, he got his own 1975 Topps card and I'm going to talk about Escape from Witch Mountain. I took my kids to see the Duane The Rock Johnson remake. They enjoyed it. I found a copy of the old movie thinking they would like it...they liked it better. Sometimes kids do a good thing when they see it.