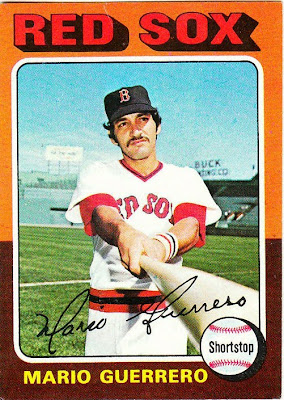 Card fact: With this card, the orange-brown color combo ties the green-light green combo for the overall lead with 16 cards each. These two color combos will remain No. 1 and 2 for the next 50 cards or so. Then there will be changes.

What I thought about this card then: Didn't see it. My knowledge of Guerrero was from his late '70s cards as an Angel and an Athletic. I wasn't impressed. A backup infielder from the American League West? Yawn.

What I think about this card now: A nice shot of what I believe is Fenway Park (the parks looked so different in the '70s). And for once, the background isn't crooked.

Other stuff: Geez, what can I say? Guerrero pioneered the major leagues for Guerreros to come. Pedro and Wilton and Vladimir followed. But Mario was the first. To my knowledge he's not related to any of them, not even Juan Guerrero, who played a single season for the Astros in 1992.

Mario Guerrero was the bridge at starting shortstop for the Red Sox between Luis Aparicio and Rick Burleson. He also was involved in trades that included Sparky Lyle and Vida Blue. 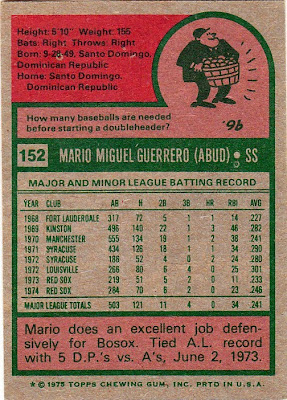 Back facts: That's an interesting cartoon. Ninety-six baseballs for a doubleheader, huh? I miss doubleheaders. ... Also, the record that Guerrero tied was for shortstops. Bobby Knoop set the record for second basemen with six in one game in 1966.

Other blog stuff: Lots of notable '70s figures were born on this date. Among them: Bob Woodward, Diana Ross, Leonard Nimoy, Vicki Lawrence, James Caan and Steven Tyler.
Posted by night owl at 1:43 AM

The first MLB games I ever were a doubleheader between the Texas Rangers and Chicago White Sox (at least I think it was the Sox). It was at the old Rangers Stadium in the early 1980's. About the only thing I remember is they had a dog/frisbee exhibition between games and they gave away frisbees to all the kids. My friend and I went to the top row and threw ours out into the parking lot. Kids are dumb sometimes!

That should say "I ever saw". I guess kids aren't the only ones who are dumb sometimes.

I always liked this card (one of a handful I have from the '75 set) b/c it looks like Guerrero is hitting the baseball with his position on it.

I also dig the Buck Printing sign in the background -- a bit of Bahston color.

And dig how his matrilineal name (or whatever it's called) is included on the back of the card. I didn't know Topps was so culturally alert then.