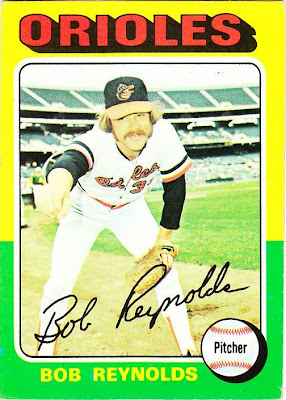 Card fact: This is the last card in Reynolds' career. In fact, he has just two Topps cards.

What I thought about this card then: I absolutely loved it. One of my all-time favorite cards in the set. I thought the pose was terrific. Never mind that it is the worst pitching follow-through ever, I thought he looked like someone out of the wild west with the mustache and long hair and pointing at the camera. My brother had this card, since he was an Orioles fan, and I really wanted that card badly.

What I think about this card now: It's still awesome, especially now that I know some background on Reynolds.

Other stuff: Reynolds was thought to be a can't-miss prospect out of high school. He could throw more than 100 miles an hour on a regular basis. But he also was a one-pitch pitcher, and therefore made into a reliever. He did well for two seasons with the Orioles -- 1973 and 1974 -- and pitched for Baltimore in the 1974 ALCS. But in 1975 he was 0-5 and bounced between the Orioles, Tigers and Indians.

An interesting story recounts his time in the major leagues. He just missed out on a baseball pension because he came 34 days short of having five years of big-league service. After being sent down to Triple A by Indians player/manager Frank Robinson in 1976, he found himself facing Robinson in an exhibition game. Reynolds retired Robinson on a fly ball, then angrily yelled at Robinson, demanding to know why Robinson sent him to Triple A. Robinson promptly ran across the  field and punched Reynolds out. Reynolds never returned to the majors. 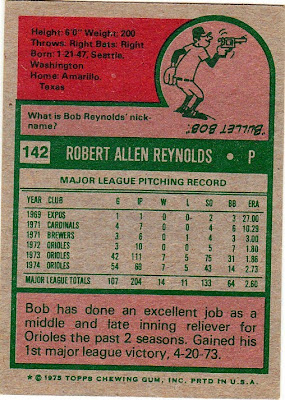 Back facts: Another gun cartoon. That just adds to the wild-west nature of the "Bullet Bob" card.

Other blog stuff: All right, I am a child of the '70s. Therefore, I must mention that Erik Estrada was born 61 years ago today.
Posted by night owl at 1:40 AM

This is one of the six cards that I have been awarded on the Topps MCG.

This card is awesome, Bob signed one TTM for me.

He does look like a wild west character. That story about Frank Robinson should be in the Night Owl Bad Ass Hall of Fame.