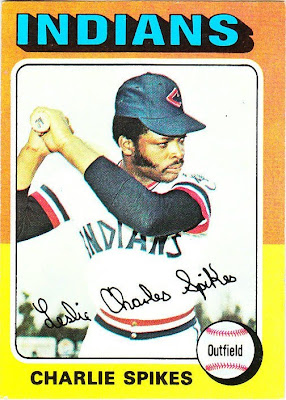 Card fact: Another card in which the signed name is not the same as the listed name. Charlie's actual first name is Leslie.

What I thought about this card then: I had the mini card (I still do). We loved his name. Spikes? Baseball spikes? Get it? Children are so easily amused.

What I think about this card now: That sure looks like a bat knob that Spikes is holding, but I don't know where the rest of the bat is. ... Other than that, Spikes looks totally bad-ass.

Other stuff: Spikes was thought to be an up-and-coming slugger for the Indians, judging by his first two seasons with Cleveland. Topps thought so, giving Spikes a card number ending in a "5" after just his second full year. But he really took a downturn the next three years and the Indians traded Spikes to the Tigers for Tom Veryzer. After a couple years as a part-time player for the Braves, he ended his career in Japan in 1981. 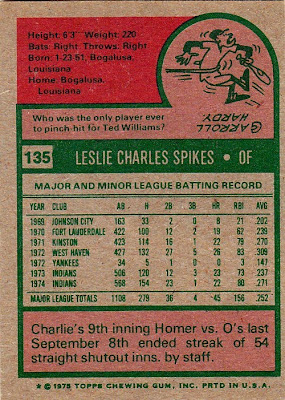 Back facts: Carroll Hardy hit into a double play in his pinch-hit appearance for Ted Williams. Hardy also pinch-hit for Roger Maris and Carl Yastrzemski. He later became player personnel director for the Denver Broncos in the 1970s.

Other blog stuff: This blog is just over one-fifth of the way through. Card No. 132 (Randy Moffitt) was the official one-fifth mark.
Posted by night owl at 1:31 AM

What a great story for your grandkids....pinch hitting for Williams, Maris and Yaz.

Spikes is a great baseball name.

As much as Charlie Spikes is a great baseball name, Leslie is not. Kind of funny.