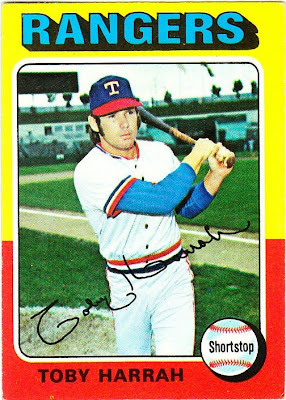 Card fact: The only player with a palindrome name (reads the same forward and backward) in the set. Later, collectors would be graced with Mark Salas and Robb Nen.

What I thought about this card then: I did not see it. But, later, I saw the 1976 Toby Harrah card. Like, the '75 card, Harrah was sans mustache and it didn't look right. Because this is the way I was used to Harrah looking: 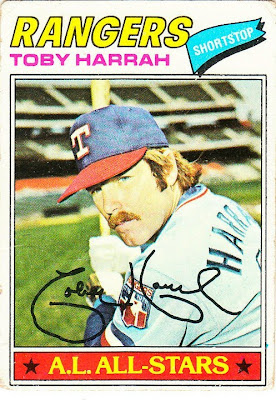 You can't top that card. It's fantastic.

What I think about this card now: The man needs a mustache.

Harrah was a fine infielder who was known for his great batting eye. He was also the last active player to have played for the Washington Senators, beginning his major league career in 1969. 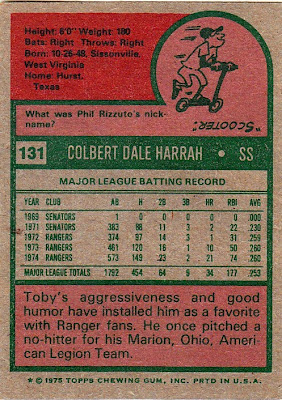 Back facts: I know for a fact Rizzuto was still being called "Scooter" at the time this card was issued. No need for past-tense in the cartoon.

Also, I like the reference to Colbert Harrah's "good humor" in the write-up.

Other blog stuff: I mentioned I would call this the "ketchup-mustard" color combo, but I never recorded it on the sidebar. It is now officially recorded.
Posted by night owl at 2:39 AM

Another sweet sweet Rangers card I actually have. Toby will always be a Ranger to me. Mustache or not.

Interesting that both of those pictures were clearly taken in Oakland. I wonder why?

And Robb Nen's father Dick, who played 1B for the Senators in the mid-1960s.